What does Cassandra mean?

[ 3 syll. cas-san-dra, ca-ssand-ra ] The baby girl name Cassandra is pronounced as Kah-SAEN-DRah (English) or Kah-SAEN-DRah or Kah-SAHN-DRah †. Cassandra is used mostly in the English and German languages, and it is of Old Greek origin. The name is of the meaning shining upon man; protrude, man. An original form of Cassandra is Kassandra (Old Greek). The name could be of the first element 'kekasmai' or 'kad', with the second element 'aner', or else it could of possibly pre-Greek origin.

Cassandra was a Trojan princess and daughter of King Priam in Greek mythology and in Homer's Iliad; her prediction of the fall of Troy was unheeded, due to a curse placed upon her by Apollo after she rejected his advances. She was later captured as a concubine of Agamemnon and eventually murdered by his jealous wife. As a result of the mythological connection, the name has traditionally been associated with someone with grim prophecies, but it was nevertheless a popular medieval name. It has appeared in literature as the name of a prophetess in William Shakespeare's play Troilus and Cressida (1602), and in the UK it was later well-known as the pseudonym used by William Connor for his Daily Mirror column, whose criticisms riled Churchill during World War II.

Cassandra is a derivative (English) of the English, German, and Greek name Kassandra.

What are the Variant Forms of Cassandra?

Cassandra is a classic favorite. Today it is still fairly popular as a baby name for girls, though it was in more widespread use in the past. The name jumped in popularity from the 1940s up to the 1990s; prior to that, it was of irregular use only. Its usage peaked modestly in 1990 with 0.343% of baby girls being given the name Cassandra. Its ranking then was #49. The baby name has since experienced a substantial decline in frequency. In 2018, its usage was 0.024% and its ranking #662, but it was nonetheless the most popular among all girl names in its group. In 2018, Cassandra was more frequently used than the 2nd most popular name, Casey, by 52% . 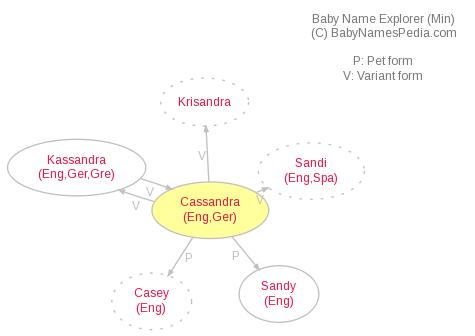