What does Cassidy mean?

[ 3 syll. cas-si-dy, ca-ss-idy ] The baby boy name Cassidy is also used, and more often so, as a girl name. It is pronounced as KAES-ih-Diy- †. Cassidy is used predominantly in the English language and its origin is Celtic. The name's meaning is descendant of Caiside, descendant of the curly-haired one. It is from the elements 'gruaig' meaning hair ; 'casta' curly. The first name is derived from the Gaelic surname 'Ó Caiside' meaning 'descendant of Caiside'. The first name has only been used in recent times, and mainly in the USA.

Cassidy has 21 variants that are used in English and other languages. Variants used in English include Casidy, Cassadee, Cassadey, Cassadi, Cassadie, Cassady, Cassedee, Cassedey, Cassedi, Cassedie, Cassedy, Cassidee, Cassidey, Cassidi, Cassidie, Kass, and Kassady. The contraction Cass, the diminutive form Cassie, and the variant spelling Kassidy are other English forms. A variant of Cassidy in other languages is Caiside (Irish).

Cassidy is unusual as a baby name for boys. Its usage peaked modestly in 1984 with 0.009% of baby boys being given the name Cassidy. It ranked at #666 then. The baby name has since experienced a fall in popularity, and is currently of very light use. Among all boy names in its group, Cassidy was nonetheless the most regularly used in 2018. Cassidy has in the past century been mostly given to girls. In 1992, the name Cassidy was given to 6 times as many girls than boys. 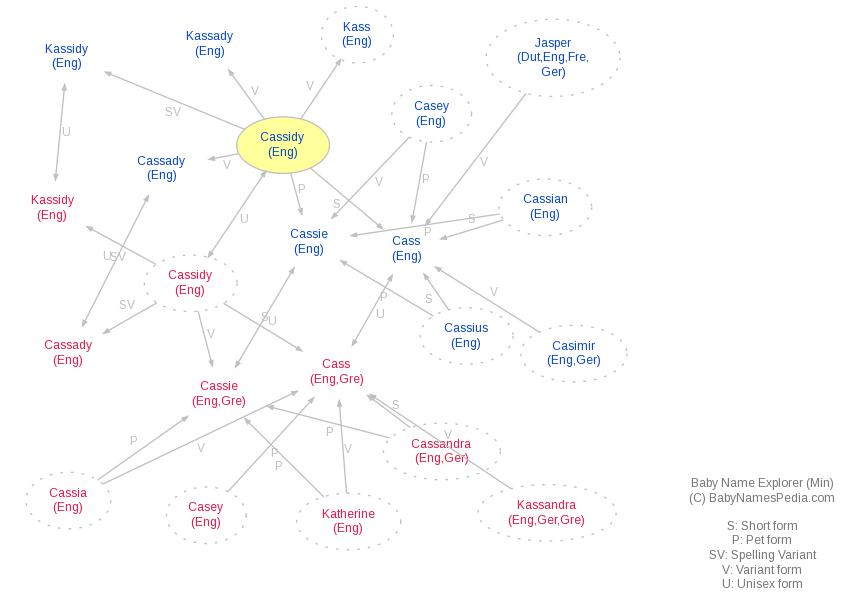