What does Cassius mean?

[ 3 syll. cas-siu(s), ca-ssi-us ] The baby boy name Cassius is pronounced as KAES-iy-ahS or KAE-SH-ahS in English †. Cassius is used predominantly in the English language and it is derived from Latin origins. It is from the element 'cassus' meaning empty, vain. The first name is derived from Cassius (Latin), the surname of one of the oldest families of Rome. It was borne by the Roman general Gaius Cassius Longinus (-42BC) who plotted to assassinate Julius Caesar; in literature, he has appeared in Shakespeare's The Tragedy of Julius Caesar (1599). The first name has been used by English speakers since the 19th century, and mainly in the USA. In recent times, it is known from the boxer Cassius Clay, who changed his name to Muhammad Ali (1942-); he took his name from his father Cassius Marcellus Clay Sr., who was named after the abolitionist Cassius Clay (1810-1903). The name Cassia (English) is the female version of Cassius.

Cassius has 19 variants that are used in English and other languages. Variants used in English include Cach, Cache, Cashos, Cashus, Casius, Casseus, Cassia, Cassian, Cassianus, Cassien, Cassio, Cassios, Kasius, and Kassio. The short form Cass, and the pet forms Cassie and Cazzie are other English variants. Cash (Latin) and Kassius (German) are foreign variants of Cassius.

Cassius is fairly popular as a baby name for boys. The name's popularity has been increasing since the 2010s. At the modest height of its usage in 2018, 0.024% of baby boys were given the name Cassius. Its ranking then was #596. In 2018, within the group of boy names directly linked to Cassius, Cash was the most frequently used. The name was thrice as popular as Cassius in that year. 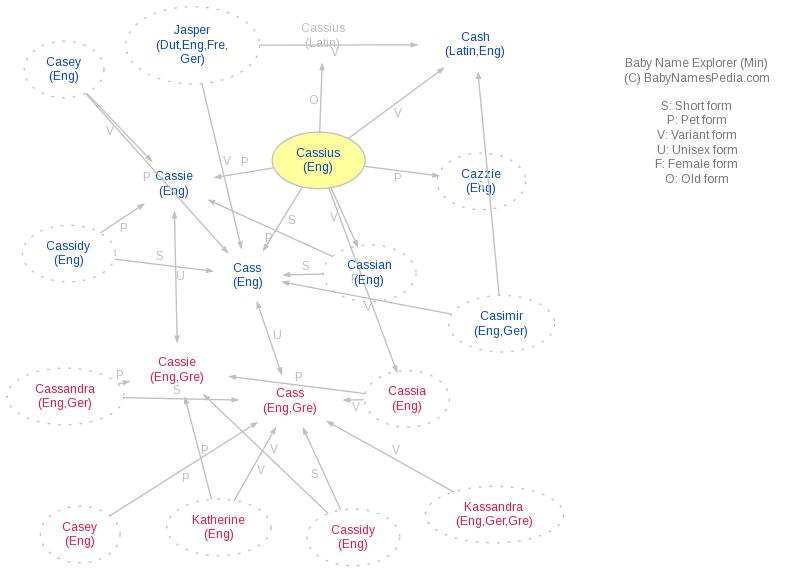