What does Cathal mean?

[ 2 syll. cat-hal, ca-th-al ] The baby boy name Cathal is pronounced as KAAR-HHahL †. Cathal is of Celtic and Germanic origin, and it is used mainly in English, Gaelic, and Irish. From Celtic roots, its meaning is 'battle-mighty'. It is derived from cath which means 'warrior, battle' ; val 'to rule'. The name was borne by the 7th-century Saint Catald of Taranto, an Irish saint and friend of Saint Patrick. It was also borne by various Irish kings and descendants of the prominent Clan Macpherson (Gaelic Mac Mhuirichs) from Badenoch in Scotland.

In addition, Cathal is a variation (Irish) of Charles (English and French).

Cathal has 14 variations that are used in English and foreign languages. English variations include Cathel, Cathil, Cathol, Cathul, Cathyl, Kathal, and Kathol.

Cathal is seldom used as a baby name for boys. It is not listed within the top 1000 names. Among the group of boy names directly related to Cathal, Charles was the most popular in 2018. 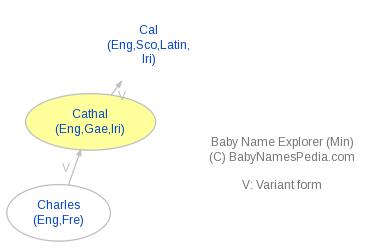