What does Cecil mean?

[ 1 syll. ce-cil, cec-il ] The baby boy name Cecil is sometimes used as a girl name. Its pronunciation is S-S-ehL †. Cecil is used chiefly in the English language and it is derived from Latin origins. It is derived from the elements 'caecus' meaning blind ; 'sextus' sixth. Caecilius (Latin), Seissylt (Welsh), and Sextilius (Latin) are original forms of Cecil. In the medieval period, Cecil was sometimes used as an English form of the Latin Caecilius. The 3rd-century Saint Caecilius converted Saint Cyprian, who subsequently adopted Caecilius as an additional name. The first name has not been used much by English speakers until the 16th century, when it came to prominence as a name given in tribute to the Cecils, an influential noble family in the Elizabethan era. The Cecils were of Welsh origin and their surname was from the Welsh Seissylt, of the Latin Sextilus and ultimately Sextus and the element 'sextus'. Sextus was a name often given to the sixth son in a family. Due to its associations with the noble family, the first name Cecil has acquired aristocratic associations. The name Cecilia (English, Finnish, German, Italian, Scandinavian, and Spanish) is the female form of Cecil.

Cecil is a rare baby name for boys. At the modest peak of its usage in 1902, 0.267% of baby boys were given the name Cecil. It ranked at #65 then. The baby name has since steeply declined in popularity, and is today of irregular use. Out of all boy names in its group, Cecil was nonetheless the most popular in 2018. In the past century Cecil has mostly been a baby boy name. In 1943, the name Cecil was given to 25 times as many baby boys than girls. 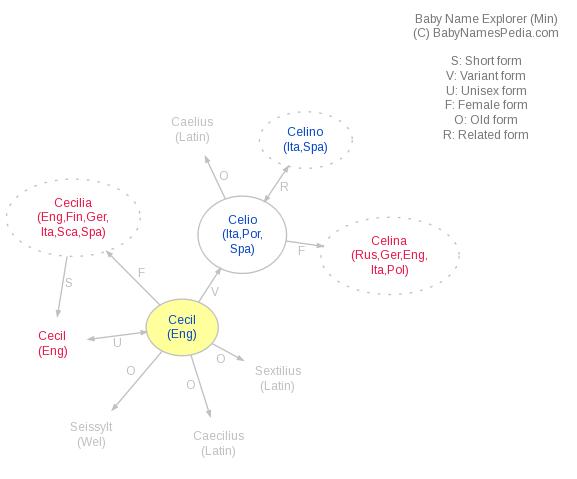