What does Cecilia mean?

[ 3 syll. ce-ci-lia, cec-il-ia ] The baby girl name Cecilia is pronounced Sah-SIYL-Yah or Sah-SIY-Liy-ah (English), CHeh-CHIY-LYaa (Italian), -THeh-THIY-LYaa (Spanish), or Seh-SIY-LYaa (Spanish-Latin American) †. Cecilia is of Latin origin. It is used mainly in English, Finnish, German, Italian, Scandinavian, and Spanish. An old form of the name is Caecilia (Latin). The first name is derived from the Roman family name Caecilius; the surname could be of Etruscan origin, or else it could be from the Latin caecus, possibly first used in tribute to an important ancestor who was blind.

Saint Cecilia (176-180), the patron saint of music, was a possibly mythical figure whose tales of martyrdom for rejecting Roman gods and subsequent large cult following helped promote the popularity of the name among medieval Christians. The name was introduced by the Normans into England, often in the form Cecily, as borne by one of the daughters of William the Conqueror. The Latinate form Cecilia was first used by English speakers in the 18th century. In literature, it has appeared as the name of the titular heroine Cecilia Beverley in Frances Burney's novel Cecilia (1782), and as the name of Cecily Cardew in Oscar Wilde's comedy The Importance of Being Earnest (1895). Cecilia is the feminine equivalent of the English Cecil.

What are the Variant Forms of Cecilia?

Variant forms inherit the origin and thus the meaning of the name Cecilia.

Cecilia is popular as a baby girl name, and it is also perceived as trendy. The name has been rising in popularity since the 1960s. At the recent peak of its usage in 2018, 0.097% of baby girls were named Cecilia. It was #155 in rank then. Out of all girl names in its family, Cecilia was the most popular in 2018. Cecilia was used 4 times more than the 2nd ranked name, Cecelia, in that year. 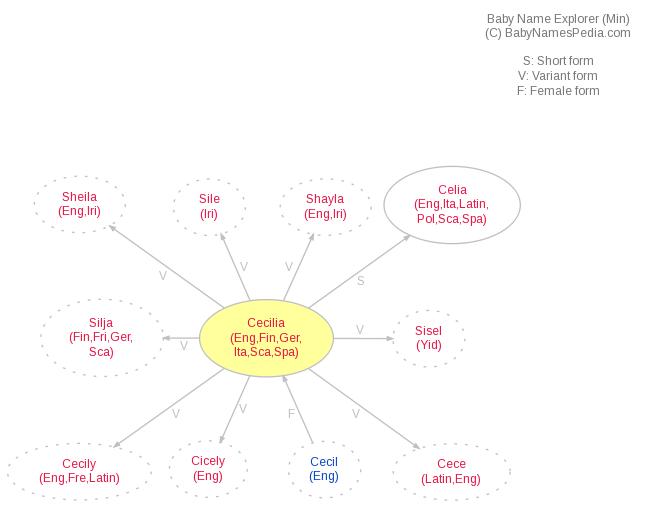