What does Cedric mean?

[ 2 syll. ce-dric, ced-r-ic ] The baby boy name Cedric is pronounced SEYDRihK †. Cedric's origin is Welsh, and its use, English and French. The name is of the meaning 'pattern of generosity; amiable'. The name could be derived from Cedrych (Welsh), itself of the elements ced and drych. It could also be from Cerdic (Old English) meaning 'amiable', which is related to the Welsh name Caradoc and was borne by the 6th-century King Cerdic of Wessex, the legendary founder of the kingdom.

The name Cedric first appeared in literature, invented by Sir Walter Scott for the character Cedric of Rotherwood, the father of his titular hero in the novel Ivanhoe (1819). As the novel was set in 12th-century England, the Old English origin is likely; however, Scott's other novels appear to use Celtic names, so he could well have based this derivation on the Welsh origin. In the 20th century, the fictional Lord Cedric Errol Fauntleroy from the popular Frances Hodgson Burnett novel Little Lord Fauntleroy (1886) gave the name a somewhat boyish image, as the boy hero was described as having long hair and a childish figure in velvet suit. In a 1921 film adaptation, Mary Pickford played the role of the boy, and the effete association somewhat decreased the name's popularity then.

Cedric has 23 forms that are used in English and foreign languages. Forms used in English include Cad, Caddaric, Ced, Cederic, Cedrec, Cedrik (used in French too), Cedro, Cedryc, Cedryck, Cedryk, Cédrick (used in French too), Fedrick, Kedric, Sed, Sedrick, and Sedrik. The pet forms Rick (used in German too), Rickey, and Ricky, and the variant spelling Cedrick are other English forms. Foreign forms of Cedric include the Welsh Ceredig, the French Cédric, and the Irish Sedric.

See also the related form, the English and Welsh Caradog.

Cedric is an all-time favorite. Currently it is still a somewhat popular baby name for boys, though not to the extent it was previously. The name jumped in popularity from the 1930s up to the 1970s. At the modest height of its usage in 1974, 0.055% of baby boys were given the name Cedric. Its ranking then was #230. The baby name has since experienced a decline in popularity. In 2018, it ranked at #967 with a usage of 0.011%. Within the group of boy names directly linked to Cedric, Ricky was the most commonly used. It was 72% more commonly used than Cedric in 2018. 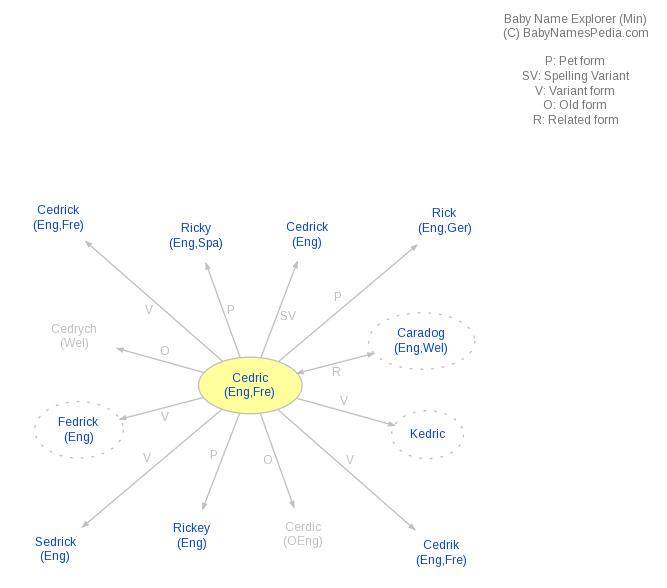