What does Celia mean?

[ 2 syll. ce-lia, cel-ia ] The baby girl name Celia is pronounced as SIYL-Yah or SIY-Liy-ah in English, CHEH-LYaa in Italian, -THEH-LYaa in Spanish, or SEH-LYaa in Spanish-Latin American †. Celia is primarily used in the English, Italian, Latin, Polish, Scandinavian, and Spanish languages. It is of Latin origin. It is from the words 'caelum' meaning heaven ; 'coeli' sky, heaven. The first name is derived from the Roman family name Caelia (Latin), which is possibly of the element 'caelum'; Caelia is also the feminine equivalent of Caelius. The first name was seldom used in the medieval period; among English speakers it was first popularized via literature, when it appeared as the name of a character in Shakespeare's play As You Like It (1623). It later appeared in Ben Jonson's comedy Volpone (1606).

Celia is also an English form of the English and French name Celeste.

Celia has 17 forms that are used in English and other languages. Forms of Celia used in English include Ceilia, Celea, Celee, Celei, Celey, Celi, Celie, Cellia, Cely, Celya, Clelia, and Cloelia.

Foreign forms include the Polish Cela, the Polish Celinka, the Portuguese Célia, and the French Célie. Another foreign form is the diminutive Silke (Dutch, Frisian, and German).

See also the related forms, the name Lucelia and the Spanish and English Maricela.

Celia is a classic favorite. Currently it is still somewhat popular as a baby girl name, but to a lesser degree than it was previously. At the height of its usage in 1902, 0.102% of baby girls were given the name Celia. It had a ranking of #167 then. The baby name has seen a decline in frequency since then, and in recent years it is used on a modest scale. In 2018, its usage was only 0.015% and its ranking #936. Within the family of girl names directly linked to Celia, Cecilia was the most regularly used. In 2018, it was more widely used than Celia by 6 times. 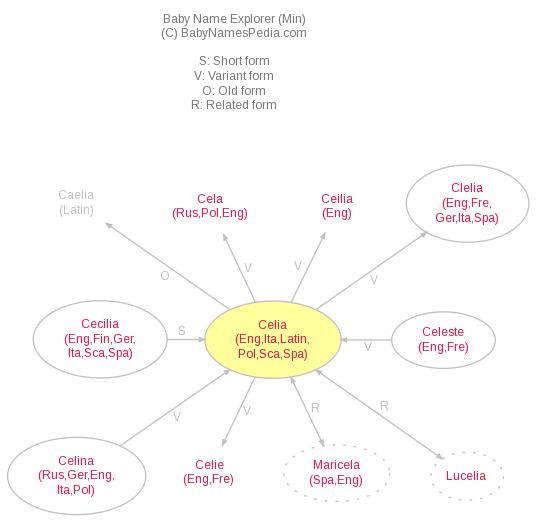