What does Celina mean?

[ 3 syll. ce-li-na, cel-ina ] The baby girl name Celina is pronounced as Seh-LIY-Naa- or Sey-LIY-Naa- †. Celina's language of origin is Latin and Old Greek. It is predominantly used in Russian, German, English, Italian, and Polish. Latin origin, German use: It is derived from caelum which means 'heaven' ; coeli 'sky, heaven'. An original form of the name is Caelina (Latin). The name is of debated origin; it is sometimes taken to derive from Celia or Marcelina.

In addition, Celina is a form of the English and French Celeste in the Russian language.

Celina is also a shortening of the German and Italian Marcellina in the German language.

Celina is also a spelling variant of the English, German, and Russian Selina in the English, Italian, and Polish languages.

Celina is the feminine form of the Italian, Portuguese, and Spanish Celio.

Celina is an unusual baby girl name. Its usage peaked modestly in 1994 with 0.030% of baby girls being named Celina. It was #423 in rank then. The baby name has steeply dropped in popularity since then, and is of only sporadic use today. In 2018, among the family of girl names directly related to Celina, Celeste was the most regularly used. 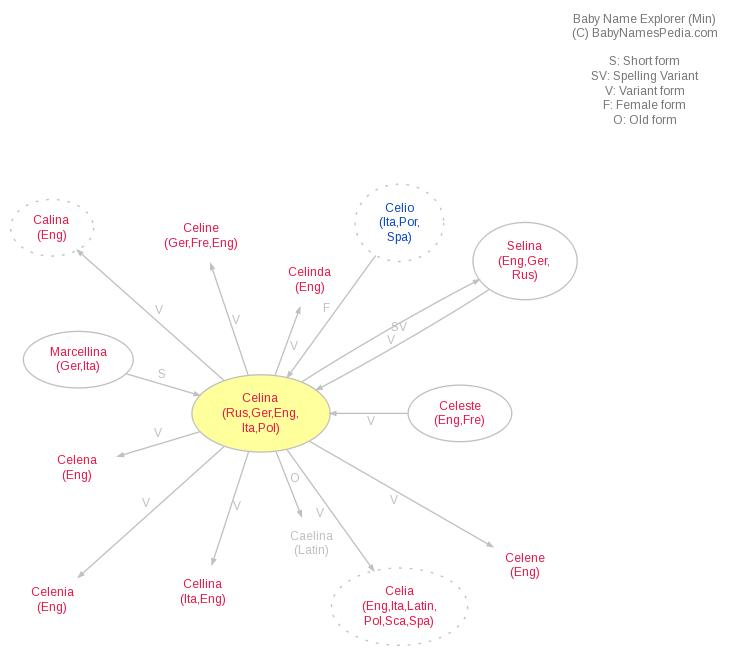