What does Celine mean?

[ 3 syll. ce-li-ne, cel-ine ] The baby girl name Celine is pronounced as Seh-LIYIYN or Sey-LIYIYN †. Celine is of Latin and Old Greek origin. It is used mainly in German, French, and English.

Celine is a variant form of the Russian, German, English, Italian, and Polish Celina in the German language.

Celine is also a shortening of the French Marcelline and a variant form of the German and Italian Marcellina in the French language.

Celine is also a variant form of the English, German, and Russian Selina in the English and French languages.

Celine is rather popular as a baby girl name, and it is also perceived as trendy. The name has been growing in popularity since the 2010s. Its usage peaked modestly in 2018 with 0.033% of baby girls being named Celine. It was #503 in rank then. Among all girl names in its family, Celine was the most frequently used in 2018. 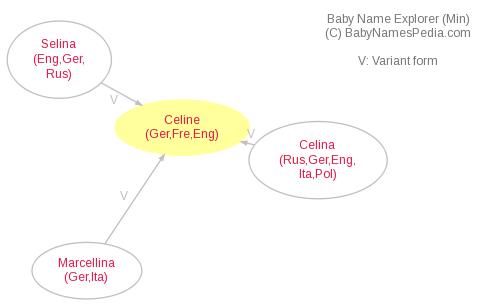