What does Chad mean?

[ 1 syll. (c)had, ch-ad ] The baby boy name Chad is pronounced as CH-aeD †. Chad is of Old English and Germanic origin. It is used mainly in English. Old English origin: It is derived from the word cad which is of the meaning 'battle, warrior'. An original form of the name is Ceadda (Old English). The name is of obscure origin. It was borne by the 7th-century Saint Chad, Bishop of York. In the 20th century, it was made known by the Rev Chad Varah (1911-2007) who founded the Samaritans. The cartoon character Chad later appeared in UK popular culture graffiti during World War II, further promoting the usage of the name. It has mainly been used as a Roman Catholic name.

In addition, Chad is a contracted form of the English Chadwick.

Chad is also an English form of the English and French Charles.

Chad is an all-time favorite. Currently it is still somewhat popular as a baby boy name, but to a lesser degree than it was in the past. The name increased in popularity from the 1940s up to the 1970s; prior to that, it was of only sporadic use. Its usage peaked in 1972 with 0.800% of baby boys being named Chad. It had a ranking of #25 then. The baby name has experienced a marked drop in frequency since then. In 2018, it ranked at #897 with a usage of 0.012%. Among the family of boy names directly related to Chad, Charles was the most widely used. It was more commonly used than Chad by 28 times in 2018. 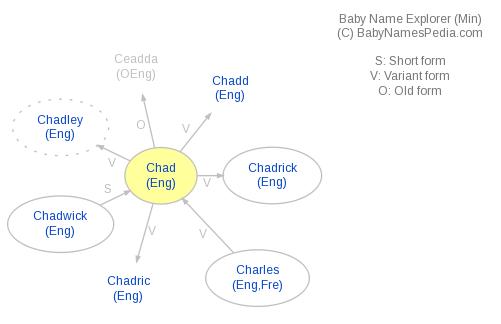