What does Chantal mean?

Chantal is mainly used in Dutch, English, and French, and it is of Old Provençal origin. The first name is derived from the French surname; it was first bestowed in tribute to Saint Jeanne Françoise Frémont de Chantal (1572-1641) who founded the Visitation order of nuns. She married the Baron de Chantal, whose surname is of a place name in Saône-et-Loire, and ultimately of the Old Provençal 'cantal' (meaning stone, boulder). The name was later associated with the French 'chant'. It is popular among French speakers in Canada.

What are the Variant Forms of Chantal?

Chantal's origin, as well as its use, is in the French language. It is derived from the word chant which means 'song'. It represents the transferred use of the geographic name and the surname as a given name.

Chantal is rare as a baby girl name. At the modest peak of its usage in 1990, 0.021% of baby girls were given the name Chantal. It was #552 in rank then. The baby name has suffered a marked decline in popularity since then, and is of only very light use today. Out of all girl names in its family, Chantal was nonetheless the most popular in 2018. 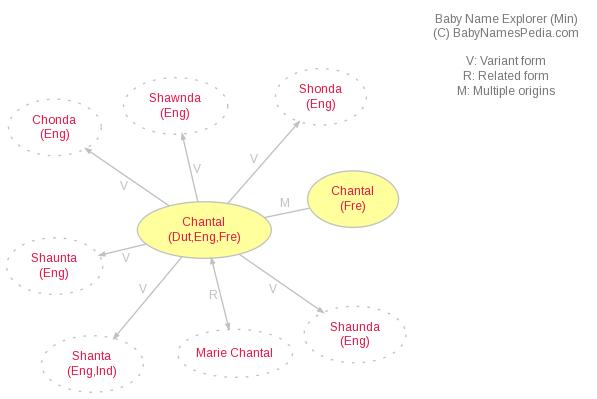