What does Charis mean?

[ 2 syll. (c)ha-ris, ch-ar-is ] The baby girl name Charis is pronounced as KAER-ihS (English) or KEH-RIHS †. Charis is an English and German name of Old Greek and English origin. Old Greek origin: It is derived from the word 'kharis' which is of the meaning grace, kindness. Older forms of the name include Charis (Old Greek) and Chariton (Old Greek). The name was borne in Greek mythology by one of the Three Graces, who were known for their charm and beauty. In the medieval period, the name was often associated with the goddess, or else with the original notion of charity. The variant Charissa was first created in literature, by Edmund Spenser for his epic poem The Faerie Queene (1590,1596). In the 17th century, during the vogue for 'virtue' names, the name was adopted by English Puritans for its associations with the Christian concept of 'grace'. In recent times, the appearance of a beautiful character bearing the name in the Georgette Heyer romance novel Frederica (1965) has increased its popularity.

In addition, Charis is a derivative of the English name Charity.

Charis is a widely used name; it has 37 derivatives that are used in English and other languages. English derivatives of Charis include Caressa, Caris, Carisia, Carissa, Carisse, Carrissa, Chareese, Charesa, Charese, Charisa, Charish, Charisha, Chariss, Charissa, Charissee, Charista, Charris, Charys, Charyss, Charysse, Cherice, Cherise, Karas, Karisa, Karissa, Sharice, Sharise, Sherise (used in Greek as well), and Sherisse. Other English forms include the contracted form Chari, the diminutives Charie and Karrisa (used in German as well), and the spelling variants Charice, Charise, and Karis. A derivative of the name used in other languages is the Spanish Carisa. The spelling variant Charisse (French and Greek) is another foreign form.

Charis is uncommon as a baby girl name. It is not in the top 1000 names. 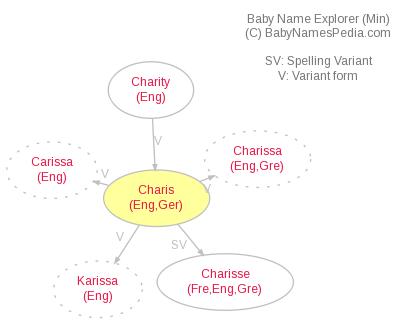