What does Charisse mean?

[ 2 syll. (c)ha-ris-se, ch-ari-sse ] The baby girl name Charisse is pronounced as -SHAARihS †. Charisse is used chiefly in French, English, and Greek. It is derived from Old Greek, French, and English origins. The name was first bestowed in honor of the American dancer and actress Cyd Charisse (1921-2008); her surname is of uncertain origin.

In addition, Charisse is a spelling variant of the name Charis (English and German) in the French language.

Charisse is also a variant of the name Charissa (English and Greek) in the English language.

Charisse is also a variant of the name Charity (English) in the Greek language.

Variant forms share both the origin and meaning of Charisse.

Charisse is uncommon as a baby girl name. At the modest height of its usage in 1971, 0.012% of baby girls were named Charisse. It had a ranking of #727 then. The baby name has seen a marked fall in popularity since then, and is today of infrequent use. Within all girl names in its family, Charisse was nevertheless the most popular in 2018. 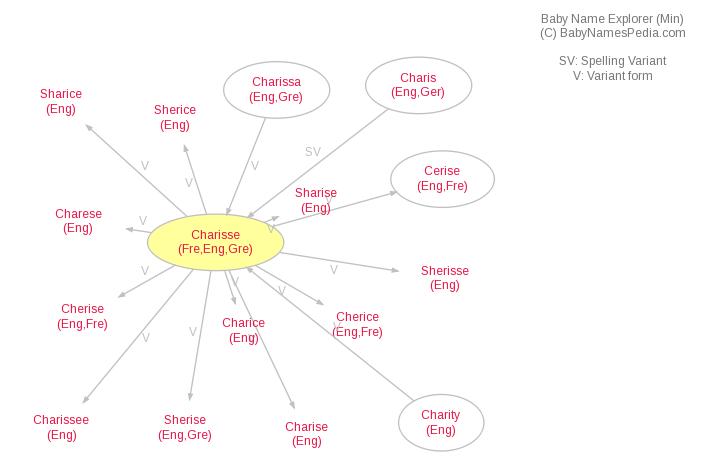