What does Charles mean?

[ 2 syll. (c)har-les, ch-arl-es ] The baby boy name Charles is pronounced as CHAAR-ahLZ (English) or -SHAERL (French) †. Charles is largely used in the English and French languages, and it is derived from Germanic origins. The Old German element 'karl' (meaning man, free man), cognate with the Old English 'ceorl', gave rise to the German names Carl and Karl. In Italy, the name became Carlo, and in Spain, Carlos. The form Carolus (Latinized) gave rise to the French name Charles, as well as eastern European forms such as Karel or Carol.

The name Karl has been borne from the early days by aristocrats and members of royal families, especially in Germany, Sweden, and Norway, and by seven emperors of Austria. The equivalent words for 'emperor' in languages such as Czech, Hungarian, and Polish are ultimately descended from the name Karl.

As for the name Charles, the most famous bearer was the Frankish king and Holy Roman Emperor, Charles the Great (742-814), also known as Charlemagne in French and Carolus Magnus in Latin. It was also borne by Charlemagne's grandfather Charles Martel (688-741), and by later numerous Holy Roman Emperors and kings of France. It was first introduced to Britain by Mary Queen of Scots, who came from France and gave the name to her only son, James Charles Stuart (1566-1625) who became King James VI of Scotland and King James I of England. The name Charles was thus borne by many succeeding members of the Stuart royal family, such as his son and grandson, who reigned as Charles I (1600-1649) and Charles II (1630-1685) respectively. The name was later made known by Bonnie Prince Charlie (Charles Edward Stuart, 1720-88), the exiled Jacobite claimant to the throne whose tale was romanticized and later captured in two films, both named Bonnie Prince Charlie (1923, 1948).

What are the Variant Forms of Charles?

Charles is a classic favorite. Currently it is still popular as a baby name for boys, though to a lesser extent than it was before. At the peak of its usage in 1932, 2.894% of baby boys were given the name Charles. It ranked at #6 then. The baby name has since fallen in popularity, and is of occasional use in recent years. In 2018, its usage was only 0.342% and its ranking #52, but it was nonetheless the most popular out of all boy names in its group. In 2018, Charles was twice as popular as the next most popular name, Carlos. Charles has mostly been a baby boy name, though in the past century it has also been used for girls. In 1975, the name Charles was given to 108 times as many baby boys than girls. 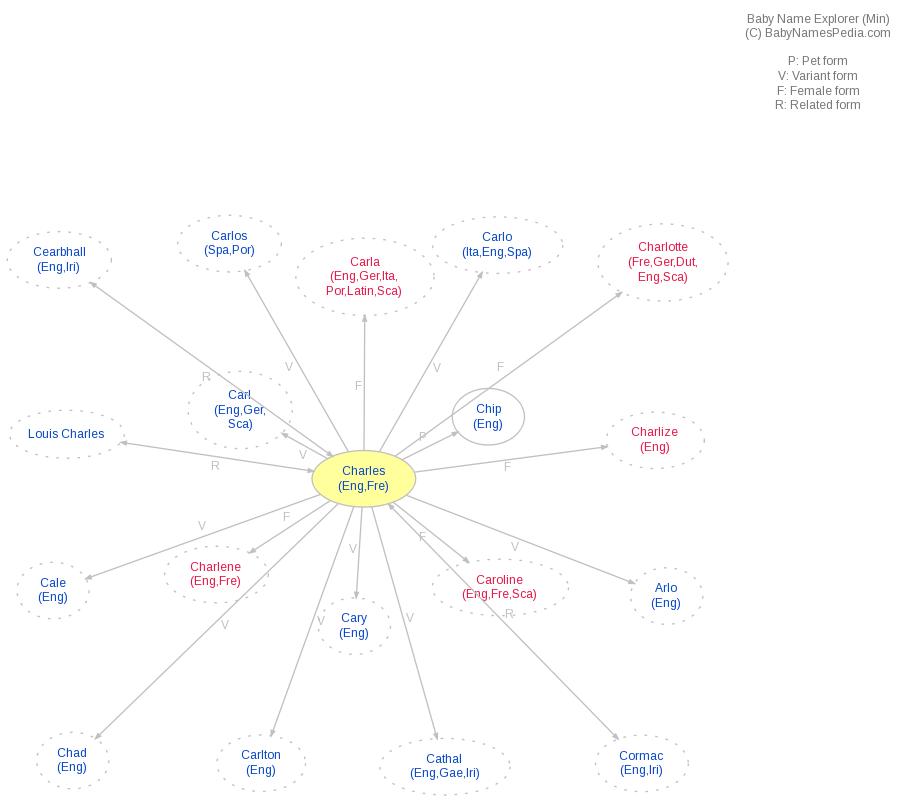