What does Charlie mean?

[ 2 syll. (c)har-lie, ch-arl-ie ] The baby girl name Charlie is also used, though less frequently, as a boy name. It is pronounced CH-AARLiy- †. Charlie has its origins in the Germanic language and it is used largely in English.

Charlie is a diminutive (English) of the English and French Charlene.

Charlie is also a diminutive (English) of the French, German, Dutch, English, and Scandinavian Charlotte.

Charlie is popular as a baby girl name, and it is also perceived as trendy. The name has been increasing in popularity since the 2000s. At the modest height of its usage in 2017, 0.101% of baby girls were named Charlie. It had a ranking of #154 then. In 2018, it ranked at #152 with a usage of 0.100%. Within the family of girl names directly related to Charlie, Charlotte was the most commonly used. It was more widely used than Charlie by 7 times in 2018. Although Charlie is used more commonly as a baby girl name today, there was a period prior to 2015 that it was more popular with boys. After 2016, increasingly the name became more popular with baby girls than with boys. There were 11% more baby girls than boys who were named Charlie in 2017. 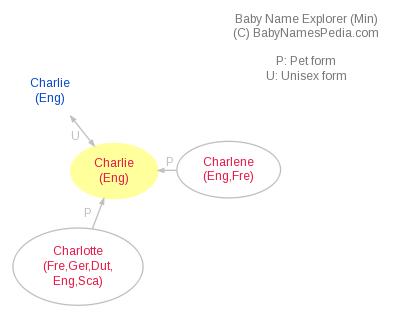