What does Charlize mean?

[ 2 syll. (c)har-li-ze, ch-arl-ize ] The baby girl name Charlize is pronounced CHAAR-LIYZ †. Charlize is of Germanic origin and it is used mainly in English. It is derived from the word karl with the meaning 'man, free man'. The name was recently made known by the actress Charlize Theron (1975-), who was named after her father Charles.

Charlize is a form (English) of the French, German, Dutch, English, and Scandinavian Charlotte.

Charlize is the feminine version of the English and French Charles.

A form of Charlize is the name Charlise.

Charlize is rare as a baby girl name. At the modest peak of its usage in 2004, 0.022% of baby girls were named Charlize. It had a ranking of #623 then. The baby name has markedly dropped in popularity since then, and is currently of only irregular use. Out of the family of girl names directly related to Charlize, Charlotte was the most commonly used in 2018. 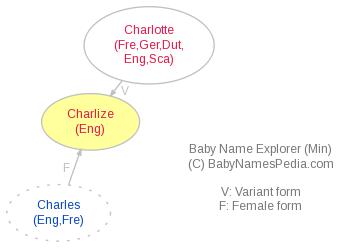