What does Charlotte mean?

[ 2 syll. (c)har-lot-te, ch-arlo-tte ] The baby girl name Charlotte is pronounced -SHAAR-LahT in English, -SHaaR-LAOT-Tah in Dutch, -SHaeR-LOWT in French, or -SHaaR-LAO-Tah in German †. Charlotte's origin is Germanic, and its use, French, German, Dutch, English, and Scandinavian. It is derived from the word karl with the meaning 'man, free man'. The name was first adopted by English speakers in the 17th century. It became popular over the next two centuries, largely due to Queen Charlotte Sophia of Mecklenburg-Strelitz (1744-1818) the wife of King George III, Goethe's poem Sorrows of Werther (1774) about an attractive lady named Charlotte, and the British novelist Charlotte Bronte (1816-55). In Scotland, the name has been used as an Anglicized form of Teàrlag.

Charlotte is a form of the English, French, and Scandinavian Caroline in the French and German languages.

Charlotte is the feminine form of the English and French Charles.

What are the Variant Forms of Charlotte?

Charlotte is a very popular baby girl name, and it is also perceived as trendy. The name has been increasing in popularity since the 1980s. At the recent height of its usage in 2018, 0.701% of baby girls were named Charlotte. It had a ranking of #6 then. Within all girl names in its family, Charlotte was the most popular in 2018. Charlotte was thrice as popular as the 2nd most popular name, Caroline, in that year. 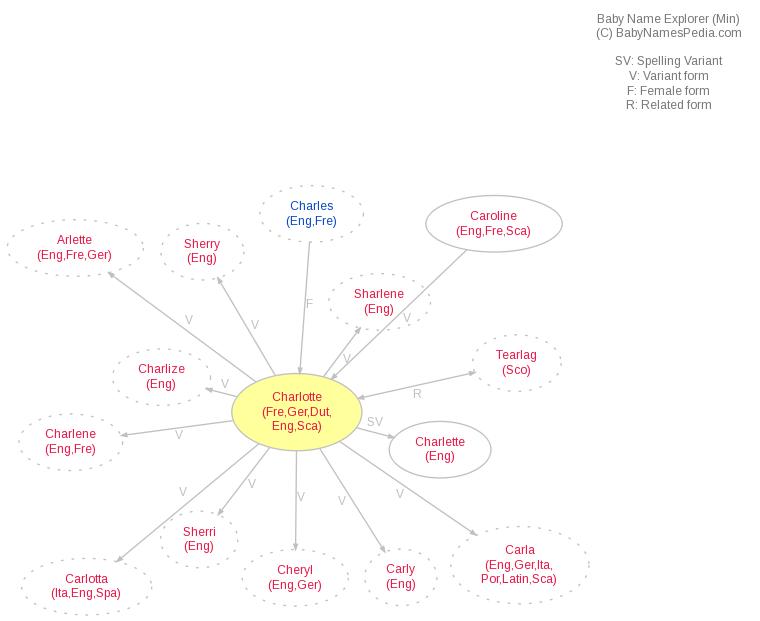