What does Chase mean?

[ syll. (c)ha-se, ch-ase ] The baby boy name Chase is pronounced as CH-S- †. Chase is primarily used in English and it is of Old French origin. Chase's meaning is hunter. It is from the element 'chacier' with the meaning to hunt. The first name is derived from the English surname, which was originally given in the Middle Ages to someone working as a hunter. It could also be taken as a derivation from the ordinary English word.

Chase is popular as a baby name for boys. The name has been increasing in popularity since the 1970s; prior to that, it was of very light use only. At the modest height of its usage in 2009, 0.349% of baby boys were named Chase. It ranked at #61 then. In 2018, its usage was 0.178% and its ranking #112, and it was the most widely used within all boy names in its group. Chase has mostly been a baby boy name, though in the past century it has also been used for girls. In 1998, the name Chase was given to 25 times more baby boys than girls. 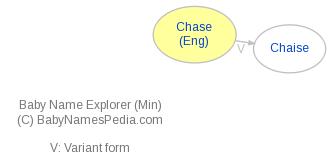