What does Cherie mean?

[ 2 syll. (c)he-rie, ch-er-ie ] The baby girl name Cherie is pronounced as -SHeh-RIY- †. Cherie is used mostly in English, and its language of origin is English and French. French origin: It is derived from the element 'chérie' with the meaning darling. The name was adopted by English speakers in the 20th century.

Cherie is a derivative of the English name Cher.

Cherie is also a derivative of the English name Sherry.

The name Cherie is used to a great extent; it has 35 derivatives that are used in English and other languages. English derivatives include Chere, Chereena, Cherena, Cherianne, Cherri, Cherrie, Cherry, Cheryl, Sharolyn, Shary, Shere, Shereena, Shereé, Sheri, Sheria, Sheriah, Sherian, Sherie, Sheriel, Sherrelle, and Sherri. Other English forms include the shortening Cher, the pet forms Cherette and Sherrill, and the spelling variants Cheree, Cheri, Cheyrie, Scherie, Sharay, Sheree, Sherry, Shery, Shiree, and Shuree. A derivative of Cherie used in other languages is the French and Iranian Shereen.

Cherie is rare as a baby name for girls. At the peak of its usage in 1969, 0.056% of baby girls were named Cherie. Its ranking then was #284. The baby name has since suffered a substantial decline in frequency, and is currently used on a very modest scale. Out of all girl names in its group, Cherie was nevertheless the most commonly used in 2018. 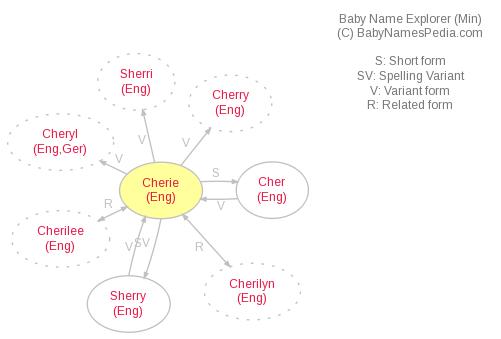