What does Cherish mean?

[ 2 syll. (c)he-ris(h), ch-eri-sh ] The baby girl name Cherish is pronounced CH-EH-Rih-SH †. Cherish's origin and use are both in the English language. It is derived from cherish ; cherir ; cher which means 'dear'. The name is a modern coinage from the ordinary English word, which is itself of the Old French elements cherir and ultimately cher. Its use could have been first influenced by Cheryth.

In addition, Cherish is a derivative of the English Cher.

Cherish has 21 derivatives that are used in English and foreign languages. English derivatives of the name include Charisa, Charise, Charish, Charisha, Charishe, Cheerish, Cherece, Chereese, Cheresa, Cheresse, Cherise, Cherisha, Cherishe, Cheriss, Cherissa, Cherisse, and Sherish. Other English forms include the spelling variants Cherrish and Cherysh. Derivatives used in foreign languages include the Greek Cherese and the French Cherice.

Cherish is rare as a baby girl name. At the modest peak of its usage in 2007, 0.022% of baby girls were named Cherish. It had a ranking of #641 then. The baby name has markedly dropped in popularity since then, and is currently of only sporadic use. Out of all girl names in its family, Cherish was nevertheless the most frequently used in 2018. 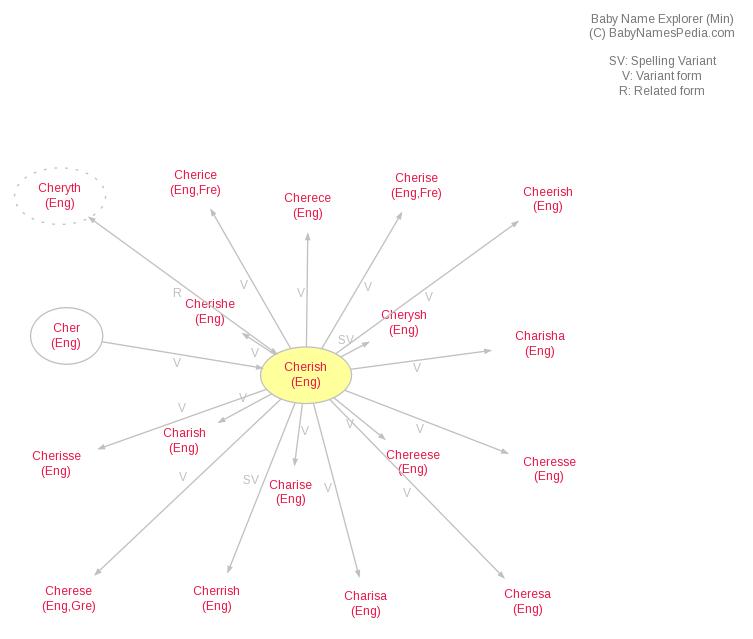