What does Cheryl mean?

[ 2 syll. (c)he-ryl, ch-er-yl ] The baby girl name Cheryl is pronounced as -SHEH-RihL- or -SHEY-R-ahL †. Cheryl is primarily used in the English and German languages. Its language of origin is English, Germanic, and French. The name was coined in the 20th century, probably from Cherie or Cherry under the influence of Beryl.

In addition, Cheryl is a form of the English name Carol.

Cheryl is also an English form of the French, German, Dutch, English, and Scandinavian name Charlotte.

Cheryl is also a form of the English name Cherie.

What are the Variant Forms of Cheryl?

Variant forms inherit both the origin and meaning of the name Cheryl.

Cheryl is an uncommon baby girl name. At the height of its usage in 1958, 1.167% of baby girls were given the name Cheryl. It had a ranking of #13 then. The baby name has fallen from favor since then, and is now used on an infrequent scale. In 2018, within the family of girl names directly linked to Cheryl, Charlotte was the most popular. The name Cheryl has been mainly given to girls, though it has also been used as a boy name in the last century. There were 417 times more girls than boys who were named Cheryl in 1958. 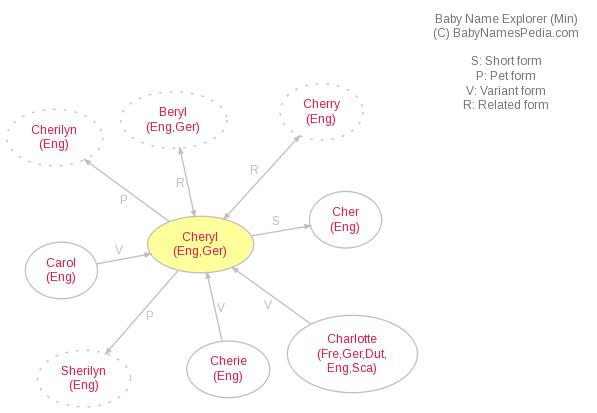