What does Chiara mean?

[ 3 syll. (c)hia-ra, ch-i-ara ] The baby girl name Chiara is pronounced Kiy-AAR-ah- †. Chiara's origin is Latin, and its use, English and Italian. The name was borne by Saint Chiara of Assisi (1194-1253), one of the first followers of Saint Francis of Assisi.

In addition, Chiara is an Italian form of the English Clare.

Variant forms inherit both the origin and meaning of the name Chiara.

Chiara is not popular as a baby girl name. It is not in the top 1000 names. In 2018, within the family of girl names directly related to Chiara, Kiara was the most regularly used. 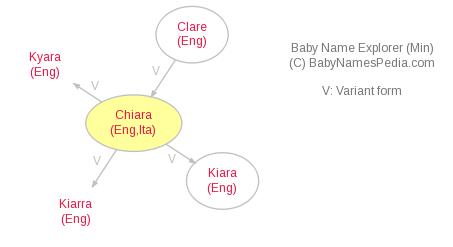