What does Christian mean?

[ 2 syll. (c)hris-tian, ch-risti-an ] The baby girl name Christian is also used as a boy name, with the latter form being far more popular. It is pronounced in English as KRIHS-CHahN or KRIH-SH-CHahN, in French as KRiyS-TYAON, or in German as KRihS-TIY-aaN †. Christian's language of origin is Latin and it is predominantly used in English. The meaning of Christian is 'Christian, follower of Christ'. It is a biblical name derived from christianus which means 'christian' ; christos 'sanctified, anointed'. An original form of the name is Christianus (Latin). The generic name has been used in the New Testament of the Bible. See Christian for more information.

In addition, Christian is a form of the Dutch, English, German, Greek, and Scandinavian Christina in the English language.

The name Christian is widely used; it has 25 forms that are used in English and foreign languages. English forms of Christian include Christi-Ann, Christi-Anne, Christiann, Christianni, Christiaun, Christiean, Christien, Christienne, Christinan, Christy-Ann, Christy-Anne, Chrystian, Chrystyan, Crestian, Crestienne, Cristian, Crystian, Kristien, Kristienne, and Krystian. Other English forms include the contracted form Chris (used in German as well), and the spelling variants Christiaan, Khristian, and Kristian. The German Karsten is a form of the name that is used in foreign languages.

Christian is an unusual baby girl name. Its usage peaked in 1992 with 0.049% of baby girls being named Christian. It was #280 in rank then. The baby name has steeply slipped in popularity since then, and is used only on a very modest scale today. In 2018, among the family of girl names directly related to Christian, Christina was the most regularly used. In the last century Christian has primarily been a boy name. In 2004, 44 times more boys than girls were given the name Christian. 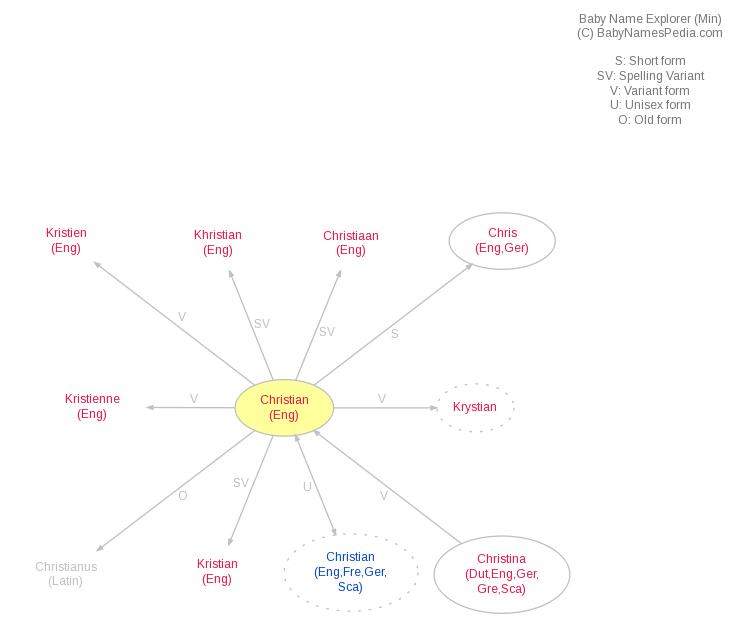