What does Christian mean?

[ 2 syll. (c)hris-tian, ch-risti-an ] The baby boy name Christian is also used as a girl name, but it is much more common for boys. It is pronounced in English as KRIHS-CHahN or KRIH-SH-CHahN, in French as KRiyS-TYAON, or in German as KRihS-TIY-aaN †. Christian is used chiefly in the English, French, German, and Scandinavian languages, and it is derived from Latin origins. The name is of the meaning Christian, follower of Christ. A biblical name, it is from the elements 'christianus' meaning christian ; 'christos' sanctified, anointed. Christianus (Latin) is an original form of Christian. The name is derived from 'Christ', which is itself from 'christos' (meaning sanctified, anointed), a Greek translation of the Hebrew for Messiah. The name has been popular in Europe since the Middle Ages. In France it has been made known by the 12th-century poet Chrétien de Troyes, while in Denmark, the name has been borne by ten kings since the 15th century, and by the author Hans Christian Andersen (1805-1875), whose name 'Hans Christian' is a traditional Danish first name. The name Christian was first taken up by English speakers in the 17th century, enjoying a boost in popularity from the main character of the same name in John Bunyan's The Pilgrim's Progress (1678). The name Christina (Dutch, English, German, Greek, and Scandinavian) is the female form of Christian.

What are the Variant Forms of Christian?

Christian is popular as a baby name for boys. The name's popularity rose from the 1930s up to the 1990s. Its usage peaked in 1996 with 0.790% of baby boys being given the name Christian. Its ranking then was #24. The baby name has since experienced a loss in popularity. In 2018, its usage was 0.338% and its ranking #55, but it was nonetheless the most popular among all boy names in its group. In 2018, Christian was more regularly used than the next most popular name, Cristian, by 6 times. Christian has predominantly been a baby boy name in the past century. In 2004, Christian as a baby boy name outnumbered its use as a girl name by 44 times. 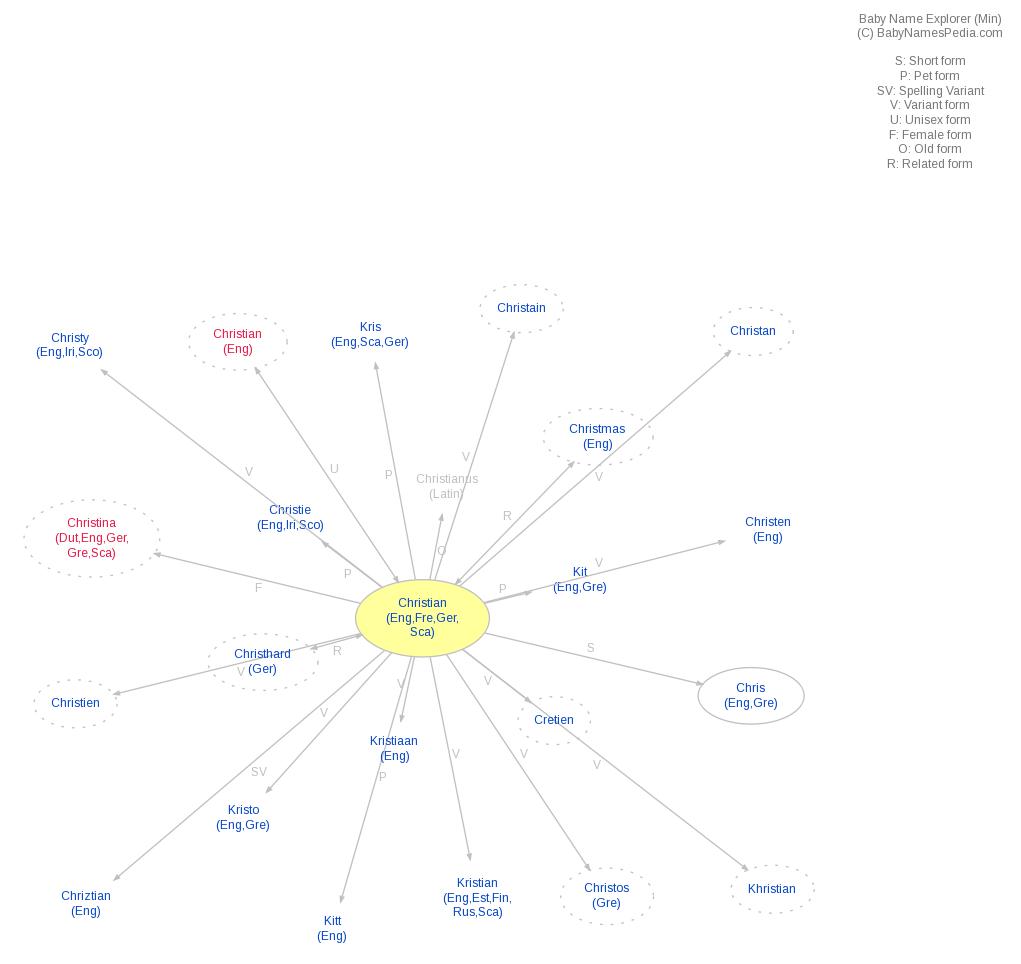