What does Clarence mean?

[ 2 syll. cla-ren-ce, cl-are-nce ] The baby boy name Clarence is pronounced KLEHR-ehNS- †. Clarence's origin is English, and its use, English and German. The name originated from the Latin title 'Clarensis' or 'of Clare'; the ducal title was first created in the 14th century by King Edward III for his son Lionel, Duke of Clarence after the latter married an heiress with land in Clare, Suffolk. The place name is ultimately from the Irish Clare River and possibly the element clár, with no etymological relation to the first name Clare. The given name was first used in the 19th century, given a boost in popularity by Albert Victor (1864-92), the elder son of Edward VII who was named Duke of Clarence in 1890 but died prematurely in 1892 and garnered public sympathy. The name has also been borne by various royal princes in Britain. Despite the difference in origin, Clare has been used as a feminine form.

Variant forms inherit both the origin and meaning of Clarence.

Clarence is uncommon as a baby name for boys. At the height of its usage in 1901, 1.035% of baby boys were given the name Clarence. Its ranking then was #17. The baby name has since markedly fallen in popularity, and is of only irregular use now. Within all boy names in its group, Clarence was nonetheless the most frequently used in 2018. Clarence has predominantly been a baby boy name, although in the past century it has also been used for girls. Clarence as a baby boy name outnumbered its use as girl name by 220 times in 1901.

Baby names that sound like Clarence include Clarance (English), Claronz, and Klarenz. 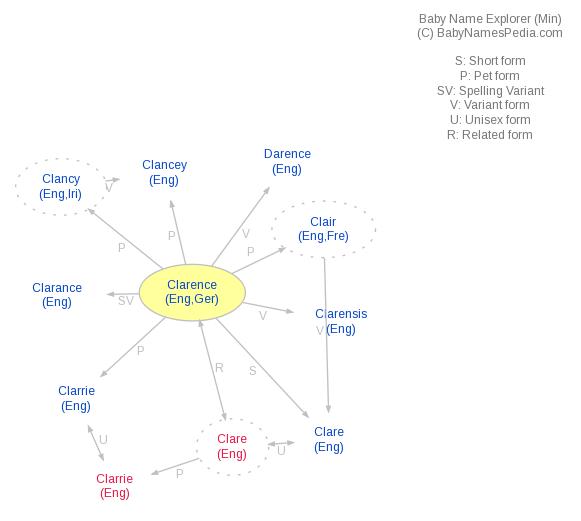