What does Claribel mean?

[ 3 syll. cla-ri-bel, cl-arib-el ] The baby girl name Claribel is pronounced as KLEHR-ahBehL- †. Claribel is used predominantly in English and it is derived from Latin origins. It is derived from the element 'clarus' with the meaning clear, bright, famous. The name is from the combination of Clara with either the suffix '-bel', or else other names such as Annabel or Isabel. It has been well used in literature, for characters in Spenser's poem The Faerie Queene (1590,1596), Shakespeare's play The Tempest (1611), and Lord Tennyson's poem Claribel (1830).

Claribel is an uncommon baby name for girls. At the modest height of its usage in 1907, 0.007% of baby girls were named Claribel. It ranked at #776 then. The baby name has since dropped in popularity, and is currently of sporadic use. In 2018, within the group of girl names directly related to Claribel, Clare was the most frequently used. 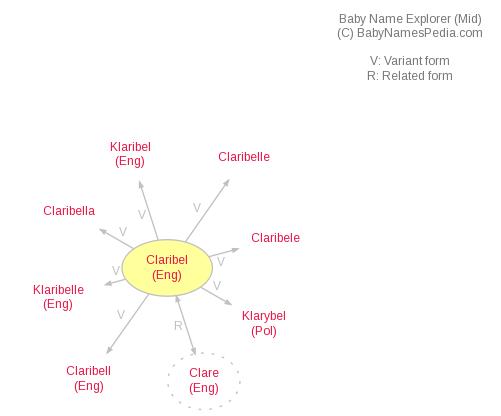