What does Clark mean?

[ 1 syll. clar(k), cl-a-rk ] The baby boy name Clark is pronounced as KLaa-RK †. Clark is an English name of Old English origin. The first name is derived from the surname and job title reserved for someone working in the clergy, who earned his living through his then unusual literacy skills, reading and writing records in religious orders. The job title is itself taken from the Old English 'clerc' (meaning cleric, clerk), and the Latin root word is 'clericus' (cleric, clerk). The given name was first used at the end of the 19th century, and mainly in the USA. In the 20th century, it was popularized by the actor Clark Gable (1901-1961) from the successful film Gone With The Wind (1939), and by the name's appearance in the Superman comics (1938-).

Clarkson (English), Clerc, Clerk, and Clerke are variants of Clark.

Clark is rather popular as a baby boy name, and it is also regarded as fairly trendy. In 1900, 0.046% of baby boys were named Clark. It was #231 in rank then. The baby name has experienced a loss in popularity since then. In 2018, its usage was 0.044% and its ranking #377, somewhat regaining its popularity in the recent decade. Among all boy names in its family, Clark was the most widely used. 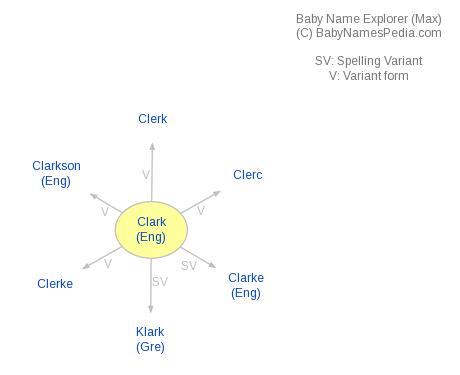