What does Claudia mean?

[ 3 syll. clau-dia, cl-aud-ia ] The baby girl name Claudia is pronounced KLAO-Diy-ah (English), KLAW-Diy-aa (Dutch, German), or KLAW-DYaa (Italian, Spanish) †. Claudia's language of origin is Latin. It is predominantly used in Dutch, English, German, Italian, Romanian, Scandinavian, and Spanish. It is a biblical name derived from the word claudus with the meaning 'lame, limping'. In the Bible, the name was borne by a Roman woman mentioned in one of Paul's letters to Timothy; she has traditionally been identified as the daughter of a British prince who became the wife of Pudens. The name was first adopted by English speakers in the 16th century. In Wales, Claudia is sometimes taken as an equivalent of Gladys. Another form of the name was later made known through the Claudine novels by the French author Colette, published in the early 20th century. Claudia is the feminine equivalent of the English and German Claudius.

Claudia is an all-time favorite. Currently it is still a somewhat popular baby girl name, but to a lesser degree than it was before. At the peak of its usage in 1952, 0.178% of baby girls were named Claudia. It was #111 in rank then. The baby name has suffered a steep drop in frequency since then, and is used only on a modest scale now. In 2018, it ranked at #872 with a usage of 0.017%, but it was nevertheless the most popular out of all girl names in its family. 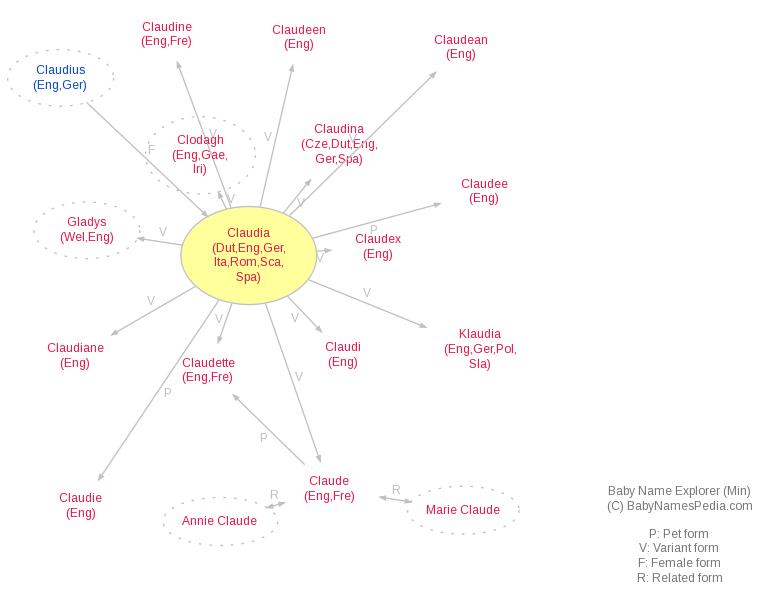