What does Clement mean?

[ 2 syll. cle-men(t), cl-eme-nt ] The baby boy name Clement is pronounced as KLEHM-ehNT †. Clement is used predominantly in the English and French languages, and its origin is Latin. It is derived from the element 'clemens' meaning merciful, gentle. Clemens (Latin) and Clementius (Latin) are old forms of Clement. The name had been popular for popes in the Middle Ages. It was well known from the fourth pope Saint Clement I, and was also borne by the Christian theologian Saint Clement of Alexandria (150-211/216). There has been 14 popes with this name. Due to its Catholic associations, the name dropped in popularity after the Reformation. It later saw a revival in the 19th century. In literature, it is borne by the fictional Sir Clement Willoughby in Fanny Burney's novel Evelina (1778). The UK prime minister Clement Attlee (1883-1967) is known as Clem. The name Clemence (English) and the name Clementine (English, German, and French) are the female versions of Clement.

The name Clement is used to a great extent; it has 37 variants that are used in English and other languages. Variants used in English include Clemence (also used in French), Clemencio, Clemens (also used in German and Scandinavian), Clemense, Clementino, Clementios, Clementius, Clements, Clemmee, Clemmey, Clemmi, Clemmons, and Clemmy. The short form Clem, the pet form Clemmie, and the variant spelling Klement (also used in Czech, Polish, and Slavic) are other English forms.

Clement is rare as a baby name for boys. At the modest peak of its usage in 1912, 0.038% of baby boys were given the name Clement. Its ranking then was #267. The baby name has since dropped out of favor, and is currently of irregular use. Out of all boy names in its group, Clement was nonetheless the most widely used in 2018. 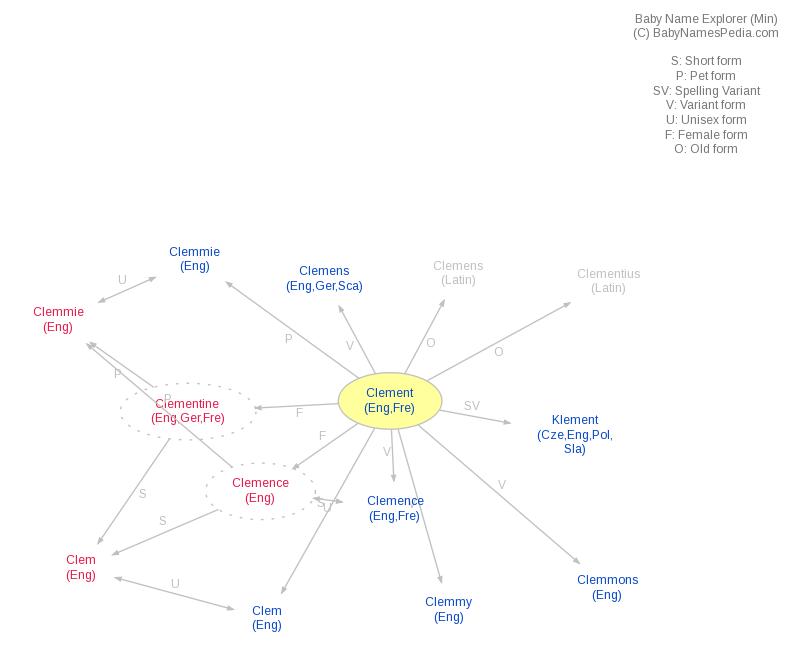