What does Clinton mean?

[ 2 syll. clin-ton, cl-int-on ] The baby boy name Clinton is pronounced as KLIHNTahN †. Clinton is used chiefly in the English language and it is derived from Old English origins. It is from the element 'tun' meaning town, settlement, homestead. The first name is derived from the aristocratic surname, which was borne by Geoffrey de Clinton (-1134), the chamberlain to King Henry I. His family held land at the village of Glympton in Oxfordshire, Britain, and the family name could have been derived from this place name which meant 'settlement by the River Glyme'. In the USA, the given name was first bestowed in honor of the prominent Clinton family, which produced two governors of New York, George Clinton (1739-1812) and his nephew DeWitt Clinton (1769-1828). In recent times, the name is famous from the American president Bill Clinton (1946-), while the short form has been made popular by the actor Clint Eastwood (1930-).

Clinton is an unusual baby name for boys. Its usage peaked in 1981 with 0.119% of baby boys being given the name Clinton. Its ranking then was #124. The baby name has since fallen from favor, and is today of very modest use. Among all boy names in its group, Clinton was nonetheless the most popular in 2018.

Baby names that sound like Clinton include Klinton (English), Clintin (English), and Clementino. 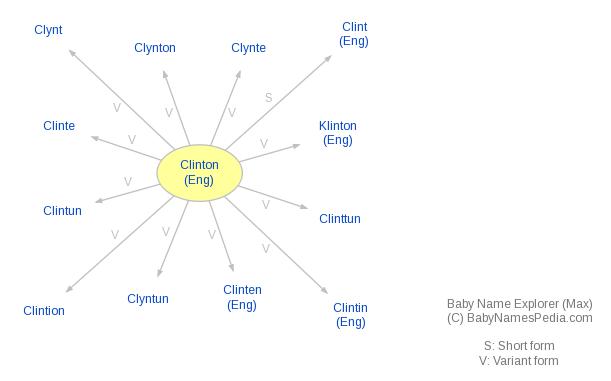