What does Clive mean?

[ 1 syll. cli-ve, cl-ive ] The baby boy name Clive is pronounced as KLayV- †. Clive is used mostly in the English language and it is of Old English origin. It is from the word 'clif' meaning cliff, riverbank, slope. The first name is derived from the surname, which is in turn from a nickname for one who lived near a cliff. The place name is found in several English counties such as Cheshire and Shropshire. The given name was first bestowed in honor of Major-General Robert Clive (1725-1774), better known as 'Clive of India', one of the key figures in the creation of British India. The baby name was especially common with parents who were employees of his extensive East India Company. In literature, the name is borne by the fictional Clive Newcombe in William Makepeace Thackeray's novel The Newcomes (1855), who is supposedly named after the British general.

See also the related form, the English and German Clivia.

Clive is an uncommon baby boy name. At the modest height of its usage in 1906, 0.008% of baby boys were given the name Clive. It was #763 in rank then. The baby name has seen a fall in popularity since then, and is currently used on an infrequent scale. Within all boy names in its family, Clive was nonetheless the most popular in 2018. 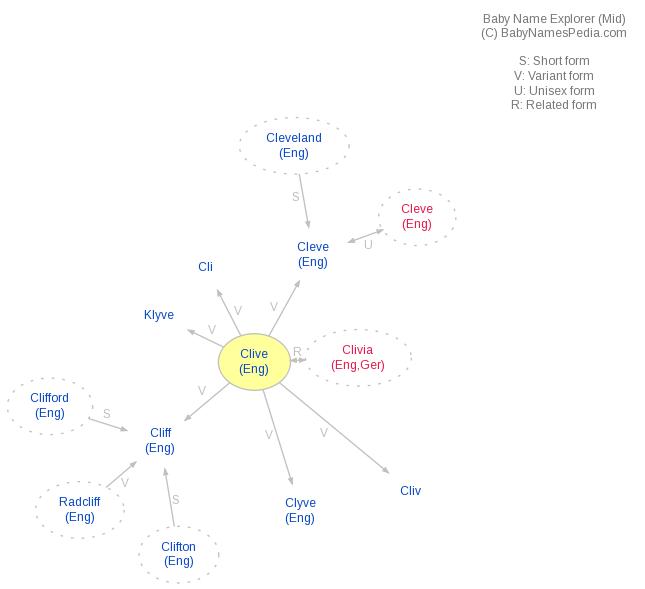