What does Cody mean?

[ 2 syll. co-dy, cod-y ] The baby boy name Cody is sometimes used as a girl name. Its pronunciation is KOWDiy- †. Cody is largely used in the English and Irish languages, and it is derived from Celtic origins. The name's meaning is son of Óda; son of Otto; son of Cuidightheach; son of the helpful one. The first name is derived from a Gaelic surname 'Mac Óda' of the element 'mac' and the meaning 'son of Óda' or 'son of Otto'. It could also be from another Gaelic surname meaning 'son of Cuidightheach' in reference to the nickname meaning 'helpful one'; here Cody can be taken to mean 'son of the helpful one'. In the USA, the name has received a boost in popularity from the famed Wild West cowboy and showman Buffalo Bill Cody (William Frederick Cody, 1846-1917).

The name Cody is used to a great extent; it has 21 variants that are used in English and other languages. Variants used in English include Coady, Codaye, Coddy, Codea, Codeah, Codee, Codell, Codey, Codi, Codie, Codier, Codyr, Coty, Kodee, Kodey, Kodi, Kodie, Kody, Koty, and Zody. A variant of Cody in other languages is Kohde (Scottish).

Cody is popular as a baby name for boys. The name's popularity rose from the 1950s up to the 1990s; before that, it was of irregular use only. At the height of its usage in 1992, 0.947% of baby boys were given the name Cody. It ranked at #24 then. The baby name has since substantially fallen in popularity. In 2018, its usage was 0.064% and its ranking #283, but it was nonetheless the most popular within all boy names in its group. In 2018, 76% more boys were named Cody than the next most popular name, Otto. Cody has mostly been a baby boy name in the past century. In 1992, the name Cody was given to 96 times as many baby boys than girls. 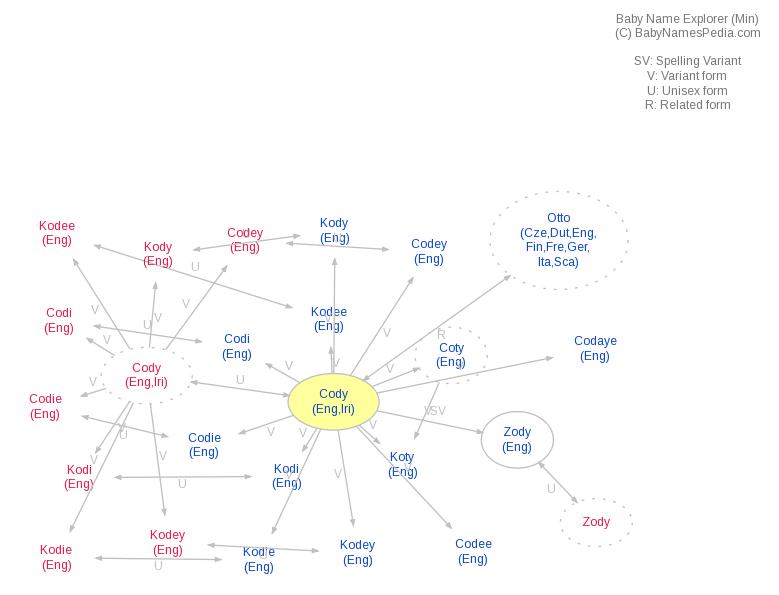