What does Colette mean?

[ 2 syll. co-let-te, col-e-tte ] The baby girl name Colette is pronounced as KowLEHT †. Colette has its origins in the Old Greek language. It is used largely in English and French. The name Colette means 'victory of the people'. It is derived from nike which means 'victory' ; laos 'people'. The name developed as a feminine diminutive of the medieval name Col or Colle, and it has been used by English speakers since the 13th century. Saint Colette (1381-1447) was the founder of the order of Colettine Poor Clares or Clarisses. The name was later promoted by the fame of the French novelist known by her pen name, Colette (1873-1954).

Colette is the feminine equivalent of the English, Scottish, and French Colin.

Colette has 24 forms that are used in English and foreign languages. English forms of the name include Coetta, Cole, Colene, Colet, Coleta, Colete, Colett, Coletta (used in German and Italian as well), Colina, Colinette (used in French as well), Collen, Collenn, Collet, Collete, Colletta, and Kollette. Other English forms include the diminutives Cloette and Coe, and the spelling variants Collett, Collette (used in French as well), and Kolette. Forms used in foreign languages include Coco (Dutch, French, and Spanish), Coline (French), and Colyne (French).

Colette is rather popular as a baby girl name, and it is also perceived as rather trendy. The name has been growing in popularity since the 2010s. Its usage peaked modestly in 2016 with 0.035% of baby girls being named Colette. It had a ranking of #468 then. In 2018, it ranked at #533 with a usage of 0.032%, and it was the most widely used among all girl names in its family. 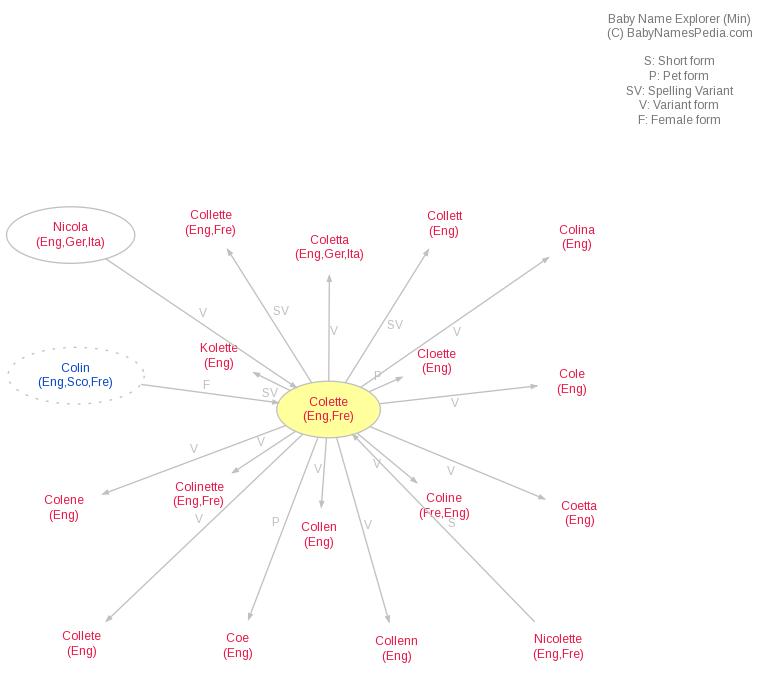