What does Conn mean?

[ 1 syll. con(n), co-nn ] The baby boy name Conn is pronounced KAAN †. Conn is of Irish Gaelic, Celtic, and Germanic origin, and it is used mainly in English and Irish. From Celtic roots, its meaning is 'leader, chief, high'. It is derived from the element ceann which is of the meaning 'head'. Conn of the Hundred Battles was a High King of Ireland around 200 AD; he was also the ancestor of the Connachta. The name has also been used as a short form of other names with the first element 'Con-'.

In addition, Conn is a variant of Conley (English and Irish).

Conn is also a contracted form of Connor (English and Irish).

Conn is also a variant of Conrad (English and German) in the English language.

Variants of Conn include Con (English and Irish) and Cuinn (Irish).

Connan (Irish and Scottish diminutive form) is another variant of the name.

Conn is uncommon as a baby name for boys. It is not listed within the top 1000 names. Within the group of boy names directly related to Conn, Connor was the most regularly used in 2018. 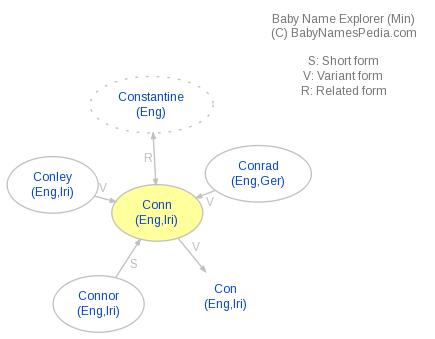