[ 3 syll. con-se-ja, co-ns-eja ] The baby girl name Conseja is also used as a boy name. It is pronounced KowN-SEY-HHaa †. Conseja is of Spanish origin and it is also used mainly in Spanish. It is from the word consejo with the meaning 'advice'. The name is derived from Nuestra Señora del Buen Consejo ('Our Lady of Good Counsel'), a title given by Spanish-speaking Roman Catholics to the Virgin Mary. This is also a festival celebrated on 26 April.

A form of the name is the Italian Consilia.

Conseja is not often used as a baby girl name. It is not in the top 1000 names. 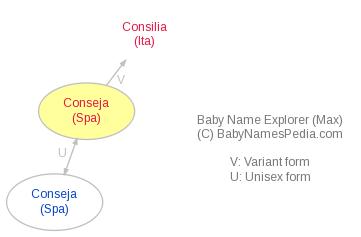