What does Constance mean?

[ 2 syll. con-(s)tan-ce, co-nsta-nce ] The baby girl name Constance is also used as a boy name, though the use for girls is far more popular. It is pronounced KAAN-STahNS in English or KaoN-STAONS in French †. Constance's origin is Latin, and its use, English and French. It is derived from constare meaning 'to withstand' ; constantis 'steadfast, constant'. An older form of the name is Constantia (Latin). Constantia is either a feminine form of Constantius, itself of the Latin Constans, or else it could be from a noun meaning 'constancy'. The name was borne by one of the daughters of William the Conqueror, and by Constance of Sicily (1154-1198), the wife of Henry VI and heiress of the Norman kings of Sicily. It was rather popular among medieval English speakers. In the 17th century, it saw an increase in use during the vogue for 'virtue' names, due to its association with the Christian virtue of being steadfast in faith. The name is borne in literature by the character Constance Neville of Oliver Goldsmith's comedy She Stoops to Conquer (1773). The Roman form was briefly revived among English speakers in the 19th century. Constance is the feminine form of the English and French Constant and the English Constantine.

Constance is an uncommon baby girl name. At the modest height of its usage in 1950, 0.253% of baby girls were named Constance. It had a ranking of #85 then. The baby name has steeply dropped in popularity since then, and is used only on an infrequent scale today. Within all girl names in its family, Constance was nevertheless the most widely used in 2018. In the last century Constance has mainly been a baby girl name. 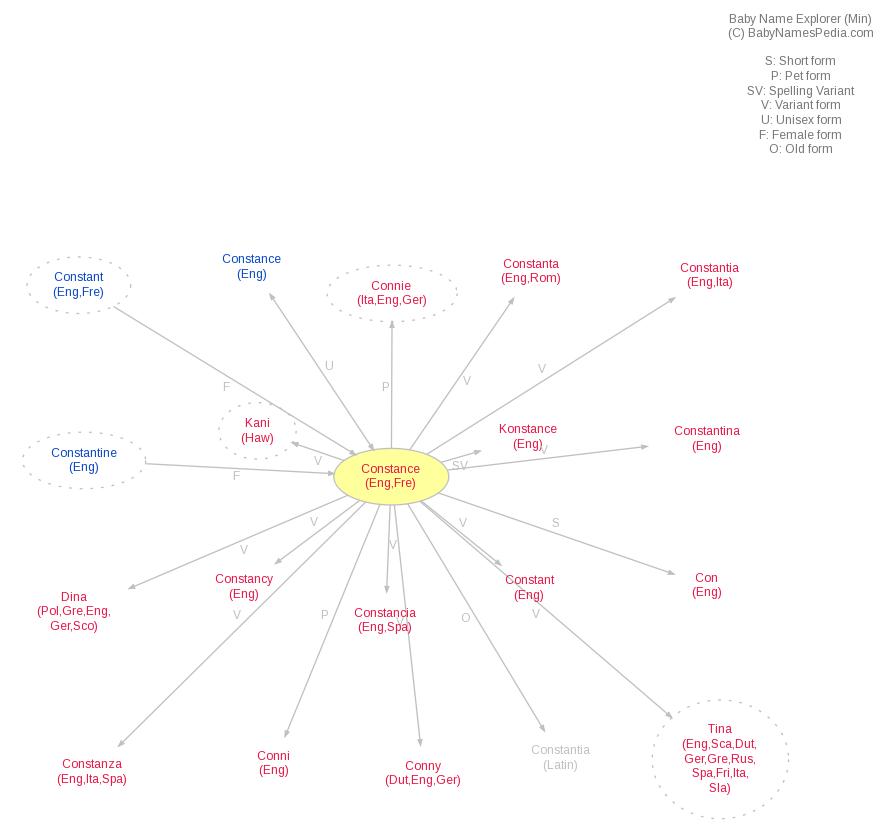