What does Consuelo mean?

[ 4 syll. con-sue-lo, co-nsu-elo ] The baby girl name Consuelo is also used as a boy name, though the use for girls is far more popular. It is pronounced as Kaa-NSWEYEYLow †. Consuelo's language of origin is Spanish. It is predominantly used in English and Spanish. The name is derived from a Spanish title for the Virgin Mary, Nuestra Señora del Consuelo 'Our Lady of Consolation', from the Spanish consuelo which is of the Latin consolatus. Traditionally, Maria was considered too sacred to use, therefore girls were often christened with other associated names. The George Sand novel Consuelo (1842-1844) has popularized the name in France.

Other variants of the name include the Spanish diminutive Chelo and the Spanish contracted form Suelo.

Consuelo is an unusual baby girl name. Its usage peaked modestly in 1928 with 0.032% of baby girls being named Consuelo. It had a ranking of #348 then. The baby name has experienced a steep drop in frequency since then, and is currently used only on a very light scale. Among all girl names in its family, Consuelo was nevertheless the most frequently used in 2018. In the last century Consuelo has mainly been a baby girl name. 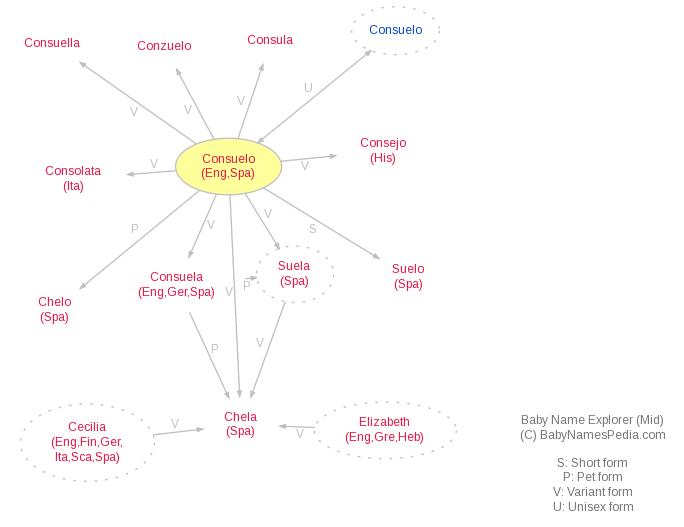