What does Cora mean?

Cora is used mostly in English and French, and its language of origin is Old Greek. It is derived from the element 'kore' with the meaning maiden, virgin. An old form of the name is Kore (Old Greek). The name was known in Greek mythology as an alternative name of the goddess of the underworld, Persephone. The 6th century BC Greek poetess Corinna was named after the goddess. In the English-speaking world, the name first appeared in literature, borne by a character in the James Fenimore Cooper novel The Last of the Mohicans (1826). The name was briefly popular among Afro-Americans in the 20th century; for example, a form of the name was borne by Coretta Scott King (1927-2006), Martin Luther King's wife.

What are the Variant Forms of Cora?

The name Cora is widely used; it has 73 derivatives that are used in English and other languages. English derivatives include Corabel, Corabella, Corabelle, Corabellita, Corah, Coraima, Coralee, Coralet, Coralete, Coraletta, Coralette, Coralie, Coralyn, Coree, Corella, Corena, Corene, Coresa, Coressa, Corette, Corilla, Corin, Corina, Corine, Corinn, Corinna (used in German and Italian too), Corinne (used in French too), Corisa, Corita, and Corra. Other English forms include the pet forms Carina, Coretta (used in Greek too), Corey, Cori, Corie, Corissa, Corrie, and Cory, and the spelling variant Kora (used in Polish too). A derivative of Cora used in other languages is the French Corrine.

Cora has its origins in the Germanic and Latin languages. It is used largely in the German language. In Germany, this developed from other names staring with 'Cor-'.

A variation of Cora is Kora (German).

Cora is a derivative of the English name Corey.

In addition, Cora is a short form (German) of Cordelia (English and German).

Cora is also a short form (German) of Cordula (English and German).

Cora is popular as a baby girl name, and it is also considered trendy. In 1900, 0.437% of baby girls were given the name Cora. It had a ranking of #55 then. The baby name has substantially fallen in popularity since then. In 2018, it ranked at #73 with a usage of 0.194%, appearing with somewhat increasing regularity in the recent decade. Out of all girl names in its family, Cora was the most popular. Cora was 6 times more commonly used than the next most popular name, Kora, in 2018. 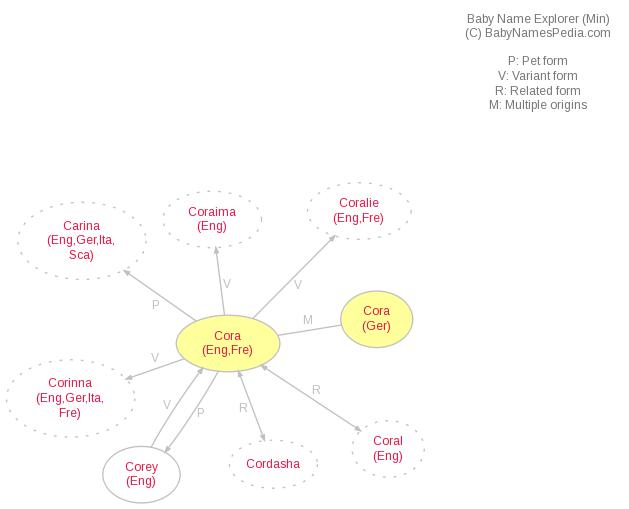