What does Cordelia mean?

[ 4 syll. cor-de-lia, co-rdel-ia ] The baby girl name Cordelia is pronounced as KaoRDIY-Liy-aa- †. Cordelia is used predominantly in English and German, and its origin is Latin. Cordelia's meaning is little heart. It is derived from the elements 'cordis' which means heart ; 'cor' heart. The name is best known from the king's faithful daughter in Shakespeare's tragedy King Lear (1603-1606); Shakespeare modified the name from the form Cordeilla (Middle English) found in Raphael Holinshed's 2nd edition of Chronicles (1587).

Cordelia is a variation of the name Cordula (English and German).

Cordelia is a rare baby name for girls. In 1900, 0.025% of baby girls were named Cordelia. It ranked at #376 then. The baby name has since fallen from favor, and is currently of very modest use. Out of all girl names in its group, Cordelia was nevertheless the most frequently used in 2018. 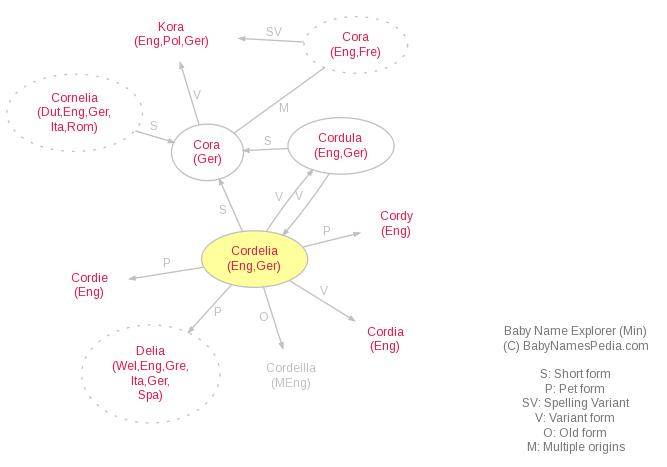