[ syll. co-ren-ti-ne, cor-ent-ine ] The baby girl name Corentine has its origins in the Celtic and Old Norse languages. It is used largely in French and German. From Celtic roots, its meaning is 'hurricane'. Its meaning is derived from the word korventeen.

In addition, Corentine is a form of the English Corey.

Corentine is the feminine version of the Breton, French, and German Corentin.

Corentine is uncommon as a baby girl name. It is not in the top 1000 names. 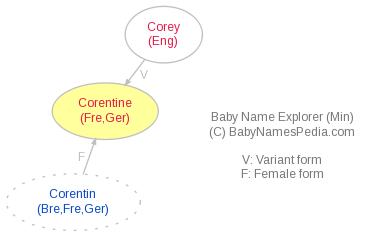