What does Corey mean?

[ 2 syll. co-rey, cor-ey ] The baby boy name Corey is sometimes used as a girl name. Its pronunciation is KAOR-iy- †. Corey is used chiefly in the English language, and its origin is Old French and Old Norse. Old Norse origin: It is literally from the word 'corey' meaning ravine. The name is of debated origin; it could be from the English surname Corey, derived from the personal name Kori (Old Norse), or else it could be from Corbin. It is common among Afro-Americans. The name's popularity was given a boost by the fictional Corey Baker on the American TV series Julia (1968-1971).

Corey is a variant of the name Corbin (English).

Corey is a fairly popular baby name for boys. The name's popularity rose from the 1940s up to the 1980s; before that, it was of very light use only. At the modest peak of its usage in 1989, 0.383% of baby boys were given the name Corey. It ranked at #55 then. The baby name has since suffered a steep loss in popularity. In 2018, its usage was 0.032% and its ranking #469, but it was nonetheless the 2nd most popular after Corbin, out of all boy names in its group. In 2018, the name was twice as popular as Corey. In the past century Corey has mostly been a baby boy name. In 1995, the name Corey was given to 23 times as many baby boys than girls. 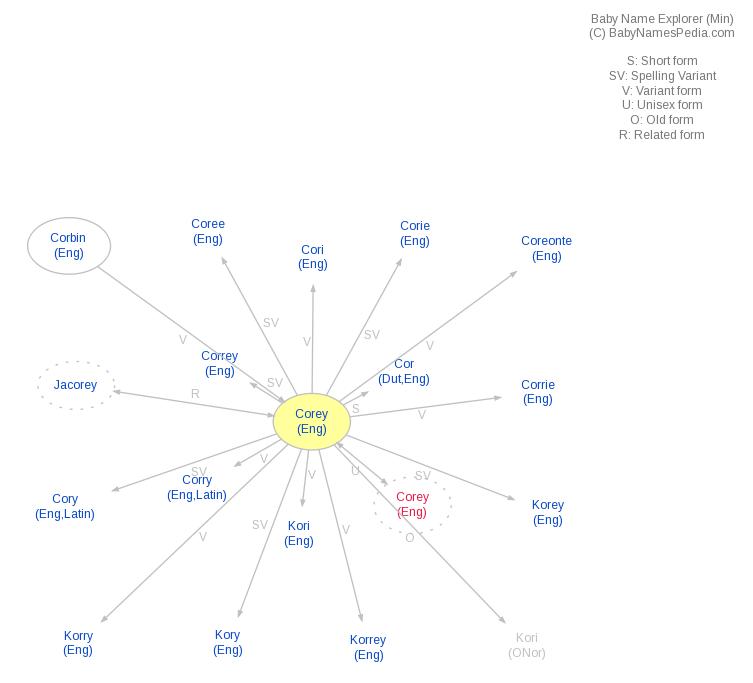