What does Corinna mean?

[ 3 syll. co-rin-na, cor-i-nna ] The baby girl name Corinna is pronounced in English as Kah-RIYN-ah or in German as Kow-RIH-Naa †. Corinna's language of origin is Old Greek, and it is predominantly used in the English, German, Italian, and French languages. It is derived from the element kore which means 'maiden, virgin'. An original form of Corinna is Korinna (Old Greek). The name was borne by a 6th-century BC Greek poetess who was a teacher to the well known poet Pindar; she was named after the Greek goddess Kore. The name is also borne by Ovid's love interest in his book Amores (16BC); Ovid's work spawned the use of the name in 17th- and 18th-century literature, such as in Robert Herrick's poem "Corinna's going a-Maying" (1648).

Corinna is a derivative (English, German, and Italian) of the English and French Cora.

Corinna has 18 derivatives that are used in English and foreign languages. Derivatives used in English include Coreana, Corinne (used in French too), Correna, Kareena, Karena, Karenna, Karinna, Karrena, Karrina, and Korinna (used in German too). Other English forms include the pet form Corrie, and the variant spellings Corina (used in French, German, and Romanian too), Corrina, Koreena, Korena, and Korrina. The German Korinne is a derivative of Corinna that is in foreign languages. Another foreign form is the variant spelling Korina (Greek).

Corinna is an unusual baby name for girls. Its usage peaked modestly in 1972 with 0.012% of baby girls being given the name Corinna. Its ranking then was #717. The baby name has since experienced a steep drop in frequency, and is currently of only sporadic use. In 2018, among the group of girl names directly linked to Corinna, Cora was the most widely used. 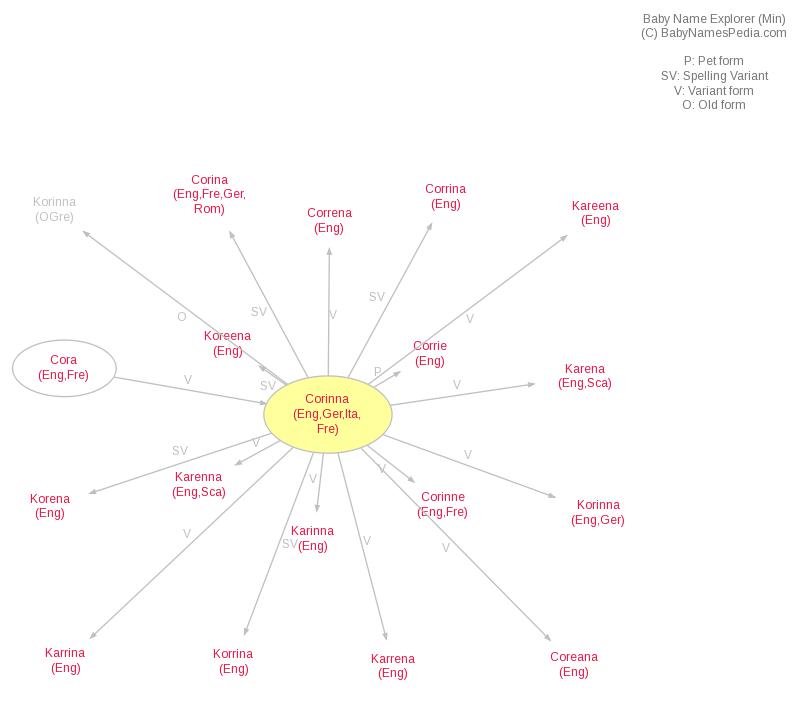