What does Corinne mean?

[ 2 syll. co-rin-ne, cor-i-nne ] The baby girl name Corinne is pronounced in English as Kah-RIYN or in French as Kow-RIYN †. Corinne's language of origin is Old Greek. It is predominantly used in the English and French languages.

Corinne is a form of the English and French Cora.

Corinne is also an English and French form of the English, German, Italian, and French Corinna.

Corinne is an all-time favorite. Currently it is still a somewhat popular baby girl name, but not as much as it was in the past. Its usage peaked in 1926 with 0.056% of baby girls being given the name Corinne. It was #249 in rank then. The baby name has declined in popularity since then, and in recent years it is used on a modest scale. In 2018, it ranked at #795 with a usage of 0.018%. Among the family of girl names directly linked to Corinne, Cora was the most regularly used. It was 10 times more regularly used than Corinne in 2018. 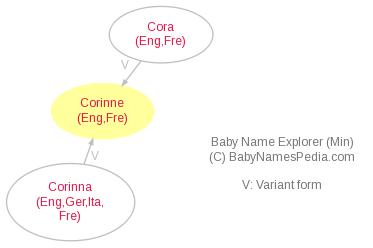