What does Cormac mean?

[ 2 syll. cor-mac, co-rm-ac ] The baby boy name Cormac is pronounced KAORMaeK †. Cormac's language of origin is Celtic. It is predominantly used in the English and Irish languages. The meaning of the name is 'son of charioteer; impure son'. It is derived from corb meaning 'chariot; defilement' ; mac 'son'. The name is of obscure meaning, but the most common interpretation is 'son of charioteer'. The name was borne by many early Irish figures, including the 3rd-century Cormac Mac Airt, one of the most famous ancient High Kings of Ireland.

Variations of Cormac include Cormack, Cormag (Gaelic and Scottish), Cormic, and Cormick.

Cormac is not frequently used as a baby boy name. It is not listed in the top 1000. In 2018, out of the family of boy names directly linked to Cormac, Charles was the most popular. 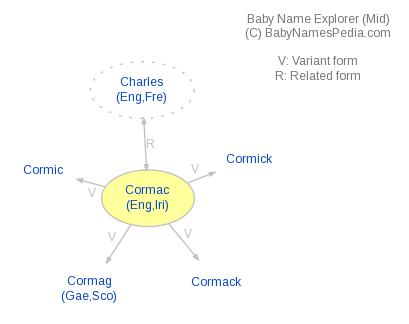