What does Cornell mean?

[ 2 syll. cor-nel(l), co-rne-ll ] The baby boy name Cornell is sometimes used as a girl name. It is pronounced as KaoRNEHL- †. Cornell is used chiefly in the English and French languages, and its origin is Latin and Old French. From Old French roots, its meaning is crow; talkative person. The first name is derived ultimately from the Roman family name Cornelius (Latin). Modern use of the name is however an Anglicization of the surname Corneille (Medieval French), reflecting French influence during the Middle Ages. Corneille was a form of Cornelius, though it also gained a new meaning during the medieval period via the French word 'corneille' meaning 'crow'. Corneille could thus have been a nickname for a 'talkative person'. The name was first introduced to English speakers by the Normans and it spread quickly across Europe.

Cornell is a variant of the name Cornelius (Dutch, English, and German) in the English and French languages.

Cornell is unusual as a baby name for boys. Its usage peaked modestly in 1962 with 0.011% of baby boys being given the name Cornell. Its ranking then was #509. The baby name has since experienced a substantial loss in popularity, and is today of sporadic use. In 2018, among the group of boy names directly linked to Cornell, Cory was the most widely used. Cornell has predominantly been a baby boy name in the past century. 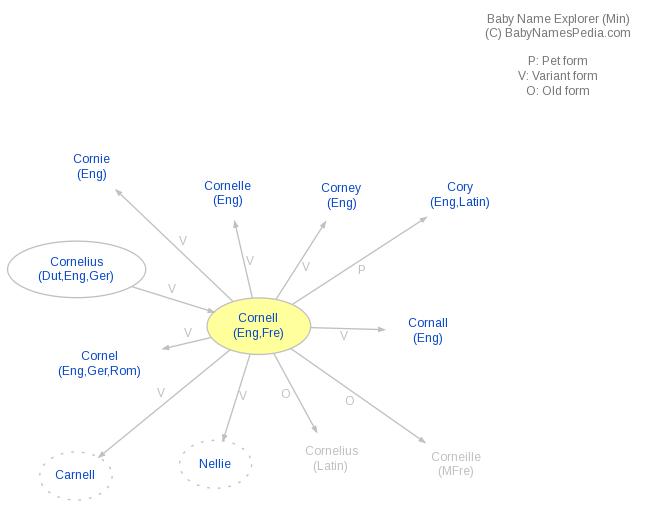