What does Cosmo mean?

[ 2 syll. co-smo, cos-mo ] The baby boy name Cosmo is pronounced as KAASMow †. Cosmo is used predominantly in the English, German, and Italian languages, and it is derived from Old Greek origins. The first name is from Kosmas (Old Greek), itself originally a short form of other names containing the element 'kosmos' (meaning order, harmony, beauty, universe). The name was borne by Saint Cosmas; he was martyred with his twin brother Saint Damian in the early 4th century and became the patron saint of physicians and of Milan. The name thus became popular in Italy, especially in the form Cosimo, as borne by Cosimo de' Medici (1389-1464), the first of the Medici rulers of Florence during most of the Italian Renaissance. In the 18th century, the name was brought to Britain by the Scottish dukes of Gordon, who were associated with the dukes of Tuscany; the father of the 3rd Duke of Gordon chose the name for his son in tribute to his friend, Cosimo III of Tuscany. The name Cosima (English, German, and Italian) is the female version of Cosmo.

Cosmo has 18 variants that are used in English and other languages. Variants used in English include Cos, Cosma, Cosme, Cosmé, Cosmos, Coz, Cozmas, Cozmo, Cozmos, Kos, Kosmo, and Koz.

Cosmo is uncommon as a baby name for boys. At the modest height of its usage in 1913, 0.005% of baby boys were given the name Cosmo. It ranked at #933 then. The baby name has since fallen in popularity, and is currently of sporadic use. Within all boy names in its group, Cosmo was nonetheless the most widely used in 2018. 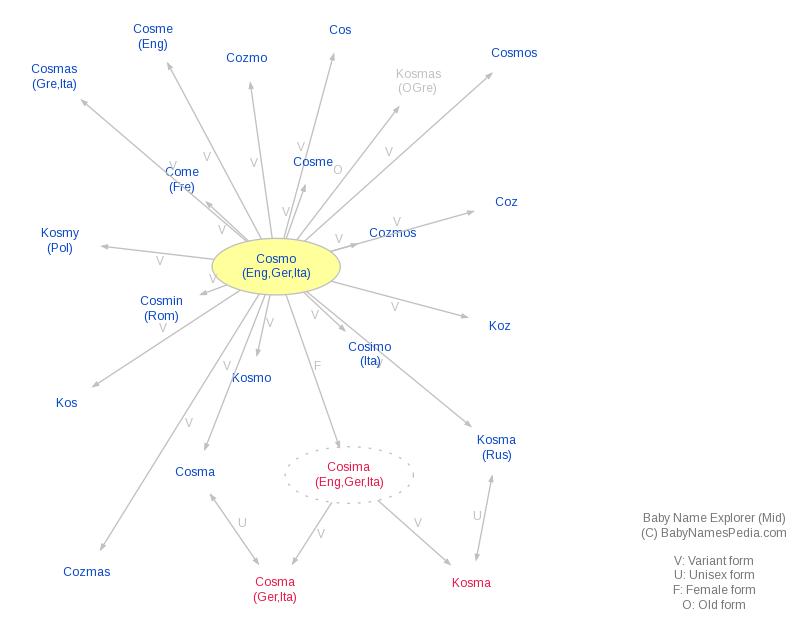