What does Courtney mean?

[ 2 syll. cou-(r)tney, co-urtn-ey ] The baby boy name Courtney is also used as a girl name, with the latter form being much more common. Its pronunciation is KAORTNiy- †. Courtney is used predominantly in the English language and it is derived from Old French origins. The name's meaning is short nose; domain of Curtius; domain of the short one. It is from the elements 'court' meaning short ; 'nez' nose ; 'curtus' short. The first name is derived from the aristocratic surname, which has been associated with the French nickname 'court nez' from an early period. The surname could also be from the Norman French village name Courtenay meaning 'domain of Curtenus'. The place name refers to the Gallo-Roman landlord Curtenus or Curtius, whose name is from the Latin 'curtus'. The masculine given name was first adopted in the mid-19th century, starting from the USA. See Courtney for more information.

Courtney is uncommon as a baby name for boys. At the modest height of its usage in 1977, 0.047% of baby boys were given the name Courtney. It ranked at #254 then. The baby name has since fallen out of favor, and is currently of very light use. Within the group of boy names directly linked to Courtney, Curtis was the most popular in 2018. Though Courtney is more popular as a girl name today, there was a period before 1961 that it was given more often to boys. From 1962 on, increasingly more girls than boys were named Courtney. In 2001, the name Courtney was given to 25 times as many girls than boys. 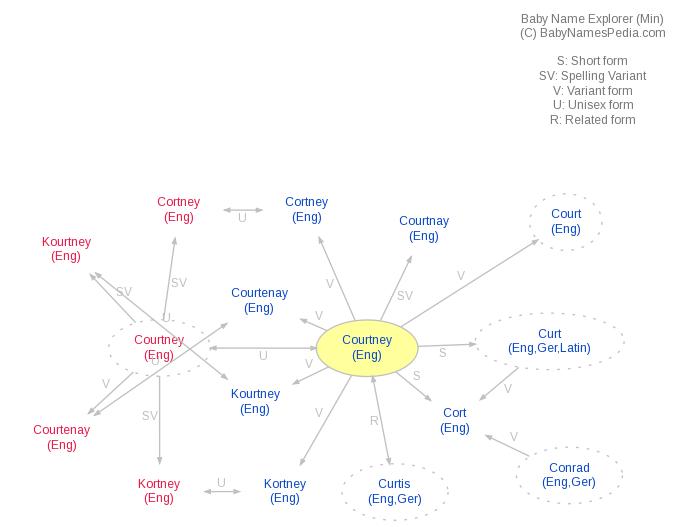