What does Cowell mean?

Cowell is an English name of Old English origin. The first name is derived from the surname, which is itself from the name of various English towns, such as Cowhill in South Gloucestershire, or Cow Hill in Preston, Lancashire. The place names are themselves of the Old English elements 'cu' and 'hyll'; therefore their meaning is 'cow hill' in reference to a hill where cows are kept and raised.

Cowell is a baby boy name of irregular use. It is ranked outside of the top 1000. 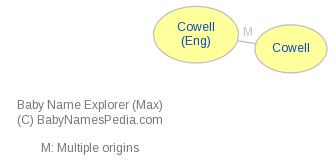