What does Craig mean?

[ syll. crai(g), cr-a-ig ] The baby boy name Craig is pronounced KR-NG †. Craig's language of origin is Celtic. It is predominantly used in English and Scottish. The first name is derived from the common Scottish surname, which is from a nickname for someone living near a cliff or any of several places in Scotland named with the Gaelic creag. The given name was first used in the mid-19th century; it has since dropped its Scottish flavor and is now used in many other English-speaking countries.

Both the origin and meaning of Craig is inherited by all variant forms.

Craig is an uncommon baby boy name. At the modest height of its usage in 1960, 0.495% of baby boys were named Craig. It was #42 in rank then. The baby name has steeply dropped in popularity since then, and is currently of only very light use. Within all boy names in its family, Craig was nevertheless the most regularly used in 2018. 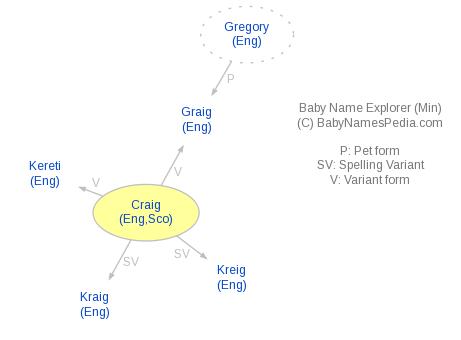